Being Radical - Protecting the Markets 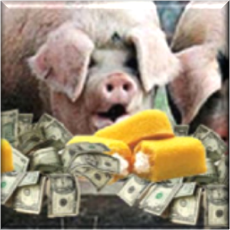 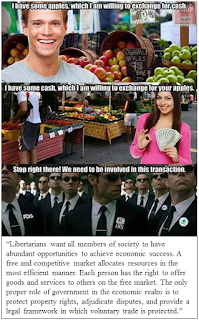 Muhammad Rasheed - ...and to prevent the formation of monopolies and cartels that threaten Free Market competition.

Gerald Welch - Sorry, I don't see that power enumerated in the Constitution.

Muhammad Rasheed - When corporations monopolize the market, it is no longer free and competitive, allocating resources in the most efficient manner. You're only against monopolies when the gov does it?

Is that the Libertarian stance?

Muhammad Rasheed - The government should protect the Free Market, which protects our capitalist way of life.

Gerald Welch - Yes, it is. The Tenth Amendment specifically gives the limitation to the powers of the Federal Government.

The only possible option is Article I, Section 8, which allows Congress to regulate state to state commerce, but that still does not give it power to, say, break up a company as it did Ma Bell in the early 80's.

That being said, it ALSO should not have bailed out all of those "Too big to fail" corporations in 2008. See, that's what puzzles me. If they claim they have this power, then why didn't they bust up THOSE businesses?

Oh, could it be that Wall Street is so heavily invested in both parties is the real reason they are "too big to fail"?

Marcellus Shane Jackson - I don't see anything preventing monopolies and cartels from doing anything.

No. Libertarianism is all about a free and competitive market. Monopolies are the natural predator of the Free Market; without competition it doesn't exist.

Gerald Welch - Libertarianism is also about a small government, the size regulated by the Constitution. No Libertarian would say that the Federal Government would not have the authority to use Article I, Section 8 in that manner.

Muhammad Rasheed - @Marcellus… The only thing that I know of that prevented a monopoly/cartel from forming (and even broke up one) was the Obama Administration, proving he's the most pro-American POTUS in recent history.

By definition that would make him a "radical in the White House." lol

Gerald Welch - Actually, as I referred to, Ma Bell was broke up in the early 80's.

Jonah Juarez - But, Libertarianism doesn't believe the government should be the agent to protect against monopolies, either. It is for free market but trusts individuals to prevent monopolies... Somehow... It is one of the failings of a True Libertarian stance. Most logical humans aren't that extreme in their stance and utilize whatever faculties they can to fill in the blanks like that with other legitimate means, like Gerald Welch holding that state governments should have some reach and ability to act in that way IF constituents push for that OR at the national level have an amendment passed first.

Muhammad Rasheed - "Actually," I only used breaking up a monopoly as a parenthesis side note. I was specifically emphasizing its prevention because of Marcellus' comment.

Muhammad Rasheed - Libertarianism believes in using the government's Force where it is most applicable and involves common sense. Your "somehow" doesn't compute.

Muhammad Rasheed - They believe in "limited" gov, not zero gov.

Jonah Juarez - Taken to its logical extreme, it would prefer zero government, is what I meant. It always strives for minimal government due to a preference for individual freedoms.

Jonah Juarez - That's why I included the caveat that most people who identify as Libertarian, especially intelligent types, tend not to be that extreme.

Muhammad Rasheed - Libertarianism has never been for a zero gov. That's what the folk who have zero idea of what it actually is about echo.

From the very beginning they stressed limited government, with it's primary job of using Force so the average citizen wouldn't have to walk around shooting people.

Muhammad Rasheed - Jonah, why would the extreme section of any party be the median point of the discussion? Is that logical?

Muhammad Rasheed - In my experience, it isn't "extreme Libertarians" that believe Libertarianism = zero gov/anarchy, but dismissive non-Libertarians that don't bother to learn what the party really is about.

Jonah Juarez - Um... It's not but I never said that, either. But, it's always important to keep in mind the pitfalls of any particular stance. Skepticism is logical.

Jonah Juarez - In my experience, that is true but also extreme Libertarians. However, anecdotal evidence isn't as good as other forms of evidence, so, that's a moot point.

Muhammad Rasheed - lol How would focusing on the crazy fringe members of any group be an identification of the pitfalls within the ideology itself?

Jonah Juarez - Ah! That is an interesting point... Again, this can actually be taken either of two different ways and I see what your position is but I see both sides.

1) The individual retains the right to protect their own freedoms; no "real" need for government

Both are valid as "libertarian" but the more "extreme" it is the more it refines itself as different from some other perspective.

I mean, you're not wrong. Most of us are actually independents and/or moderates... But identifying with any stances implies a focus stemming from their base ideologies with a hint of their more extreme form. Otherwise... Why bother to identify, at all?

Muhammad Rasheed - I will never agree that the "extreme" stance should be used in the general philosophical discussion. It actually doesn't make since why you would even WANT to legitimize any fringe.

A foundational aspect of Libertarianism is the delegation of Force to the government, and to have a strong court system. The lack of these isn't an extreme version of that ideology, it's a different ideology altogether.

Jonah Juarez - Interesting, I've actually NEVER heard it described that way. Not even in any basic definitions... Hmm..

Jonah Juarez - I don't say it to legitimize it. As I explained, I say it to draw the line in the sand for where problems can occur; a sort of "Beyond this point, there be dragons!"

Muhammad Rasheed - What are your sources, Jonah?

Muhammad Rasheed - At this point it seems like you're getting those definitions from liberal propaganda tracts. lol

Jonah Juarez - Direct quote: "Libertarians strongly oppose any government interfering in their personal, family and business decisions." That doesn't sound like advocating for any government, if at all, possible... Just sayin', lol... But again, as a thinking, logical person, I assume that most concede that a certain amount is necessary. Part of my worry lies in the disagreements of how much is "necessary." That's all. Nothing more.

Muhammad Rasheed - I would think that someone priding himself on having a logical mind would recognize that.

Believe me, I understand that. I don't know if you realize but I'm quite the student of philosophy. If my college had still had a philosophy degree, I'd have double-majored in it (and psychology). I definitely know what you're saying.

But, from a philosophical perspective, playing Devil's advocate, if we will, what exactly is that difference? Is it anything like when our minimal government protected the "heathens" from their previous "devil-worship" and helped convert them to Christianity? Who exactly decides when it is protection and when it is interference? The People? The "majority"? Lol... Just messing around, though. But truly, we always have to be careful. Stanley Milgram taught us that quite well...

Jonah Juarez - Gerald Welch--and many others--brings up often that whatever the government has the power to protect us from gives the government the power to take that away from us...something like that... Does anyone have the exact quote handy? I can look it up...

Jonah Juarez - And I'm not "priding" myself on having a logical mind. I'm just doing the best I can with what I have.

Muhammad Rasheed - Both Benjamin Tucker, and Ayn Rand, pointed out that gov (especially the ideal limited gov of libertarians), has no rights accept those delegated to it by the citizens for a specific purpose. www.libertarianism.org

Muhammad Rasheed - Gerald is right in that regard, but that is the reason why they advocate for the "limited" gov concept. A small gov is manageable by the citizens so they can make sure it performs as intended. The bigger it is, it becomes a dangerous entity that functions as a nation within a nation, and that's where the problems arise.

Jonah Juarez - I fully agree with that. It's something I've said often. I'd love to figure out a way to make EVERY addition to government/governmental power always start on a limited timeline and have a set deadline when it would expire.

Muhammad Rasheed - The people make the constitution that defines the rights delegated to the government., to answer your devil's advocate question. The people are also responsible for holding the gov accountable so that it conforms to the limitations imposed upon it.

Muhammad Rasheed - Voting would be that way; no need to re-invent the wheel.

Gerald Welch - I agree with Mo. Libertarians have never been for ZERO government, just VERY SMALL government, confined by the Tenth Amendment limitations of the Constitution.

Jonah Juarez - Maybe I'm nitpicking too much but, again, I use that skepticism as a way to hem in problems in thinking before they happen. I see it as a sort of logical strategy. Lol, maybe I should keep it more to myself, lol...

Jonah Juarez - I guess when I look at it, myself, I think it's also nice if the government does things like "make sure the apples aren't an endangered species of the plant that might be wiped out by over harvesting" (like the banana that no longer exists that was used to create the artificial flavor...which is why it doesn't ACTUALLY taste like any banana I've ever eaten...)... I can imagine a few other things that a larger government has the resources to do and probably should do, if possible...

Muhammad Rasheed - Protecting us is a fundamental job of the gov. Protecting the underground water reserves, and the food-bearing plants would/should be a part of that.

Jonah Juarez - My feelings, as well...

Jonah Juarez - But, usually, when I voice those, people think I'm a socialist or a liberal, lol

Muhammad Rasheed - That's because they have no idea what libertarianism actually is, as I mentioned earlier. lol

The protection of individual rights is the primary role for the gov, per Libertarianism. And if the individual is unable to fairly compete in the markets because competition has been choked off by a cartel of corporatists, then the gov has failed in its duty.

Jonah Juarez - I guess I have only met either extremists or Repubs and Dems that think the opposites are flawed and vilify me for aligning with the "wrong" cause. I don't identify. I try to remain entirely objective.

Defense of the Gold Standard & the Discovery of Freedom, pt 1 of 7
Posted by M. Rasheed at 6:53 AM