Racism or Its Rejection? 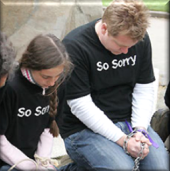 Prof: I Chose Not To Have Children, Because They’d Be White

Victor Donald Smith - I think not reproducing is un-racism.

Rick Drew - More like no guy would have her.

Scott Rocky - I'm glad she did not have children, because it would be another generation of this lunacy.

Dale Chrystof - what a self-loathing idiot

Muhammad Rasheed - I completely disagree with her Dolezal comments. I think the former NAACP cell prez was just a con-artist.

I don't see why I should consider her to be a racist. All she's saying is that when she honestly confronted the truth of the privilege born from a Eurocentric, White Supremacy Dominance, it made her repel from the horror of it. She wants to reject the political social contract of "Whiteness," not reject her biological 'whiteness' as a member of the European ethnic groups. The former is raw evil, while the latter is her very human natural state that no one rational wants to deny her.

Gerald Welch - I think she is racist because she doesn't understand that this is a cultural issue, not a racial issue.
It's like she thinks her kids will get the white disease or something.

Muhammad Rasheed - It is a cultural issue. Global domination based on race, was a cultural trait birthed out of Euro-cultures united for the 'ideal' of White Supremacy. That's the part she's recoiling in horror from.

Gerald Welch - But does she think that merely having kids will contribute to the problem? If so, she is providing a genetic excuse for bad behavior which, again, is racist.

Muhammad Rasheed - This extreme stance is just her initial cognitive dissonance emotional reaction. I'm sure it will level off.

She would be racist if she was denying someone basic rights of some kind because of their race. I can't say that she is doing that.

Muhammad Rasheed - Your attempt to treat her absolutely harmless, horrified, visceral reaction to evil as if it is in every way as bad as the evil itself, is interesting to Note though.

Gerald Welch - Racism doesn't have to do something bad, just think of less or more of one race BECAUSE of the race. In this case, that white automatically means evil, regardless of upbringing.
My point is that if she believes that white equals evil, she does not understand.

Muhammad Rasheed - lol That's not the impression I get from her. This is a classic case of cognitive dissonance, which by necessity, will not begin with a rational outburst.

Muhammad Rasheed - She's feeling an intense shame and horror based on ACTIONS. Those same actions built up a certain amount of societal privilege for certain demographics who didn't even have anything to do with the most direct of those actions. That's specifically the part she's recoiling from.

Gerald Welch - Wonder what she thinks of Bronies...

Muhammad Rasheed - You should FB Friend her and ask.

Randolph John Carter - Someone has a poor understanding of genetics.

Korac MacArthur - she's free to marry a black man or whoever she wants if it makes her happy. I think she has other issues.

Muhammad Rasheed - @Howard... That won't work. America has always had that "One-Drop Rule," remember? Traditionally you would be ostracized if it came out you had any amount of African in you as part of the breeding of new generations of slaves by the owners themselves phase. Now that a self-identifying Black American has made it to the highest office in the land, magically his white side is conspicuously being over-emphasized. Unusually so considering the history.

Dan Bennett - I haven't seen anyone characterize Obama as white. I did hear one talk show host who called him "50 Percent", though.

Muhammad Rasheed - That's exactly the part. There's a weird over-emphasis on his 'white side,' and his bi-racial-ness for no other reason than because he's the POTUS. In any other circumstance it would be the black part that is emphasized, per the "One-Drop Rule."

Gerald Welch - Not familiar about the One Drop Rule, but if it is what I think it is, we would all be black.

Muhammad Rasheed - lol True. But racism has never been known for being rational.

Nick Carroll - It's white guilt. I haven't read the article but she is likely from the regressive left.

Shane Black - Thankfully, since I've only seen two individuals out of 318 million who have gotten any traction espousing this attitude, I don't think it's a big problem, except to the mentally ill people who suffer from it. Don't know why it's a news story.

Muhammad Rasheed - lol In THIS particular case, I think the rag is showcasing it just to point out how wacko the 'regressive left' are, Shane.

Michael Hodges - I agree with her exercising her choice to not reproduce. If she feels her children would be "white" and this causes her to recoil from a perceived wrongness inherent race and she not only doesn't want to contribute to that perceived wrong but feels her children would automatically be instituted into "white-think" with NO sense of individual social equality or justice, simply ignorant of a privilege they can't themselves perceive and thus contributive to a giant, bad situation -- then she made the right choice by not reproducing.

Zodicus Zu'ul - have you seen this: Why I Agree With Taye Diggs: When We Call Biracial Kids ‘Black,’ We Disrespect Their ‘White’ Side

Really? Why did we accept ANYTHING during the era of chattel slavery? This is a question?

Muhammad Rasheed - I don't have an issue with Diggs' argument. My issue is with whites who lived & breathed the One-Drop Rule but all of a sudden reversed it starting at the '08 presidential elections.

Zodicus Zu'ul - i get you, i think. like saying no matter how far back the blood goes, one drop of Black and you're Black, at least until it's convenient and they need to find something positive to spin so they feel better about having positive feelings about someone not just like them. am i close?

Muhammad Rasheed - The racist emphasizes one side over the other in a bi-racial citizen depending on which slant best fits his/her White Supremacist narrative.

Normally they mention the black side to point out the individual is 'tainted.' For the POTUS they mention (continuously) his 'half-white' natural as a means to justify how he's smart, capable, and managed to win two brilliant presidential campaigns.
Posted by M. Rasheed at 9:44 AM