BOOK REVIEW - The Blacker the Ink: Constructions of Black Identity in Comics and Sequential Art 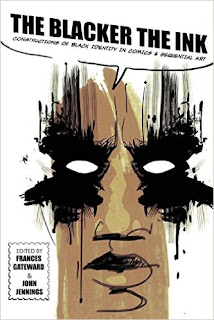 ‘The Blacker the Ink,’ edited by Professor Frances Gateward and John Jennings, is a collection of essays critiquing a diverse selection of significant sequential art works created by Black artists (and those sympathetic to their causes). This book has the distinction of being the first African-American Literature I’ve read since finishing Charles Mills potent book, “The Racial Contract” a few weeks ago. As some of The Blacker the Ink’s scholars broke down the dynamics of multilayered socio-political tissue that composed each subject, I was able to see which of these writers -- both creators and critics -- accepted the exploiter class in their self-appointed role as signatories of the West’s racial social contract or not.

Of course this side diversion was only a tiny part of the reader’s enjoyment, and this book absolutely provided a lot to enjoy. A solid, high-level academic work, my favorite parts of ‘The Blacker the Ink’ involved those socio-politically conscious scholars who would take the time to explain the source-cited details of a real life historical backdrop used by a given work, as well as the sections that introduced gifted talent I had previously been unaware of. The depth of my Wish List expanded continuously in leaps & bounds as fascinating new works were described/analyzed, often forcing me to skim and dodge to prevent spoilers from ruining a newly-anticipated reading experience.

Highly recommended, this should be on the shelf of any serious fan of the cartooning medium.
Posted by M. Rasheed at 3:21 AM