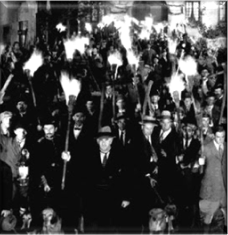 Muhammad Rasheed - An argumentum ad populum (Latin for "appeal to the people") is a fallacious argument that concludes that a proposition is true because many or most people believe it: "If many believe so, it is so."

It is logically fallacious because the mere fact that a belief is widely held is not necessarily a guarantee that the belief is correct; if the belief of any individual can be wrong, then the belief held by multiple persons can also be wrong. The argument that because 75% of people polled think the answer is A implies that the answer is A fails, because, if opinion did determine truth, then there would be no way to deal with the discrepancy between the 75% of the sample population that believe the answer is A and 25% who are of the opinion that the answer is not A. However small a percentage of those polled give an answer other than A, this discrepancy by definition disproves any guarantee of the correctness of the majority. In addition, this would be true even if the answer given by those polled were unanimous, as the sample size may be insufficient, or some fact may be unknown to those polled that, if known, would result in a different distribution of answers.
This fallacy is similar in structure to certain other fallacies that involve a confusion between the justification of a belief and its widespread acceptance by a given group of people. When an argument uses the appeal to the beliefs of a group of supposed experts, it takes on the form of an appeal to authority; if the appeal is to the beliefs of a group of respected elders or the members of one's community over a long period of time, then it takes on the form of an appeal to tradition.

One who commits this fallacy may assume that individuals commonly analyze and edit their beliefs and behaviors. This is often not the case.

Muhammad Rasheed - This is Wiki!

Muhammad Rasheed - This post is describing a logical fallacy, called the "argumentum ad populum," in which a debater will erroneously state that their position is the correct one simply because a lot of people agree with it. Being "right" and being "correct" are synonymous, being items that can be backed up (proven) with measurable facts, unlike demonstrations of this spotlighted fallacy.
Posted by M. Rasheed at 5:26 AM