Metrics of the Good Teacher 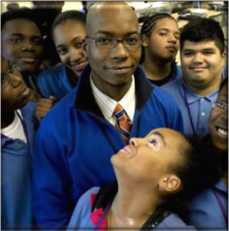 Muhammad Rasheed - "Raj Chetty, a public economist who teaches at Harvard, took part in two studies that have made headlines because they sought to quantify the value of good teachers. One released in 2012, conducted with economists at Harvard and Columbia, tracked one million students in a large urban school district over 20 years and calculated that replacing an average teacher with an excellent one would raise a single classroom's lifetime earnings by about $1.4 million. Good teachers who lifted standardized test scores also had students less likely to become teenage parents and more likely to attend a good college, among other positive results.

"He is already immersed in his next project, which explores what factors allow children to move up the economic ladder, relative to their parents."

Muhammad Rasheed - It sounds more like "teachers who raise a single classroom's lifetime earnings by about $1.4 million, had students less likely to become teenage parents, students more likely to attend a good college, among other positive results, with 'raising standardized test performances' as an interesting side effect of the above."

Fred Pomeroy - I don't see this as anything new. A good teacher will make the students want to learn more. An interested student will be less likely to drop out and more likely to get better grades and thus graduate. They have been saying for decades that high school and college graduates earn more than dropouts. $1.4 million per classroom per lifetime isn't all that much. With only twenty students that is only $70,000 per career. If someone works for 35 years that is only two thousand per year. I heard the number was near half a million per person half a century ago for the difference between a dropout's lifetime earnings and that of a college graduate.

If he wanted to make the case for hiring a good teacher, he should compare the difference in salary needed to hire a good teacher compared to the tax revenue generated by increased earnings of the more highly educated students.

Muhammad Rasheed - It was very new at the time the study came out, hence the controversy. People objected at the idea of being able to objectively measurable what makes a "good teacher." Being able to accurately predict whether a given classroom will have their earnings increase $1.5 million or not based on the track record of their instructor's performance is a good thing, despite the strawman argument of whether that amount is "all that much" or not (compared to what?).

I presume the objectors to the findings preferred to allow the idea of whether someone was a 'good' teacher or not continue to be in the realm of subjective opinion, so they could continue to bs their supervisors during Annual Appraisal time. Dispassionate & objective data that definitively proved they were effin' up all year, to the detriment of our children, would be their worst nightmare. #shitBirdsHateAccountabilityItTurnsOut

Muhammad Rasheed - I suppose it's also possible that many of them reacted negatively to the findings because they preferred to believe that whether people did well in life had everything to do with race/genetics. Consequently the very idea that anyone could do well in life if artificial, exploitation-based obstacles were removed, caused stinging cognitive dissonance waves to ripple through their selfish, hoarding, sociopathic cortex.