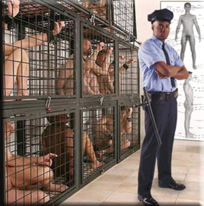 Jiba Molei Anderson – [shared link] Why is the celebration of one's own culture, when it does NOT denigrate another culture, considered racist? 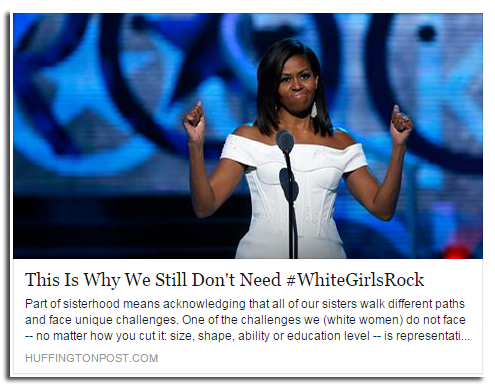 This Is Why We Still Don't Need #WhiteGirlsRock

Brian Colding - Anyone who asks us for an accounting of celebrating ourselves needs be to told to beat it in no other words than f*** off, shut the f** up and go the f** away. I REFUSE to debate or argue with anyone especially WHite folks about celebrating who we are, our history or what we collectively accomplish. They can either positively contribute or go away. There is no middle ground.

Muhammad Rasheed - Jiba Molei Anderson wrote: "Why is the celebration of one's own culture, when it does NOT denigrate another culture, considered racist?"

Because they can't celebrate themselves without denigrating someone else, so they refuse to believe you can do it. When you celebrate yourself they expect some form of payback revenge and read that into it. 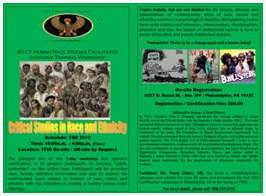 Torri Taite - So much I am learning here and the one thing the dominant society wants to destroy is empowerment of the people of color.#WhiteGirlsRock is just as ridiculous as #AllLivesMatter! Because they really don't care about addressing any issues, just deflecting. 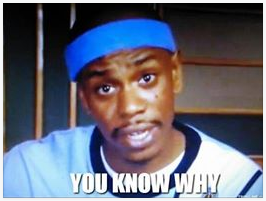 Jeff Musser - Every comment above me is right on point. We (white people) have been on the top shelf of this hemisphere for what, 500 years? We're not good at sharing. We're used to controlling the narrative for EVERYTHING. Like Muhammad above me wrote, when black people want something of their own, something that will counteract all the shit white people have put them through, many of us tend to freak out. Many of us freak out because we know that this amazing thing called being white was born out of bloodshed and that somehow, someday, sometime in the future karma is going to bite us in the ass.

Monty Nielsen - This is insane! Both black girls and white girls can rock...smdh!

Torri Taite - But white girls have been getting attention for a very long time now! When they used the 2 categories of, "Hello gorgeous" & "RIP" quite a few of the women that were RIP were women of color! They probably did put some white women in the category. But there were no women of color in the OTHER side! White hasalways been the gold standard for anything great in this world. European beauty is also the gold standard!

Karl Eburne - Saying "White girls can rock" is like walking into a Hanukkah ceremony and yelling "Yeah, but Christmas is pretty awesome too!". For starters, nobody said it wasn't, and second, you're inserting yourself in a situation where your participation isn't needed, wanted or necessary.

Little white girls have ALL of American popular culture celebrating them. What they do as they grow from girls to women becomes the standard of beauty that all other women will be held to. When they enter the workplace, even though they'll be paid less than white men, they'll be getting paid more than both black women AND black men! Nobody's kicking white girls out of school because of their hair, nobody's saying white women look like apes. Natalee Holloway and JonBenet Ramsey had the entire planet searching for their murderers, young black girls barely get coverage on the local network news though they are disappearing at a greater number than white girls.

Saying #BlackGirlsRock ain't about excluding white people, it's about including black girls and women, letting them know they are loved and appreciated for who they are, just the way they are.

What's so hard for white people to understand about that? Geez...

Monty Nielsen - Well my daughter is mixed half white and half black. She is only three, but when she gets older I don't know if she will identify herself as white or black so until then I say it is ok for all girls to rock no mater if they are black, white or any other color for that matter! If my daughter was blue I would still tell her she rocks!

Corey J. Gilson - Because racism is rooted in self-loathing and insecurity?

Torri Taite - Don't forget "reverse racism" now, where white people can now cry foul when they feel as if they aren't getting their way and could care less about introspection! And some of the self hating black people I've seen over time cover for them.

Karl Eburne - You're missing the point.

We are aware that all girls rock, just as we're aware that all lives matter. The reason why we have to say #BlackLivesMatter and #BlackGirlsRock is because this culture behaves as if their lives don't and their girls aren't good enough. You have the privilege to declare that ALL lives matter and ALL girls rock because you've never been in a position where you were told and treated otherwise. Black girls, mixed race or not, have and continue to be maligned by the culture, which is why #BlackGirlsRock exists.

Torri Taite - In truth ALL lives DO matter! Unfortunately not enough people act as if they do!

Lemmie break this down simple. The class motto is "everybody gets cookies", but in reality, only the white kids get cookies. So, somebody speaks up and says "black kids need cookies too" because they're not getting any. Repeating the class motto that "everybody gets cookies" in that situation is absurd and insulting. While it's true that it's what SHOULD be it fails completely at recognizing what IS. And, an inability to see reality as it is, not as it should be, is an obstacle to actually getting where we should be.