The Threadbare Nerve Linking an Artist & Their Art 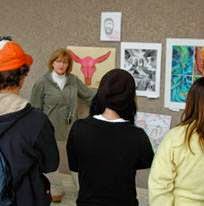 When I was a freshman in art school, the College of Creative Studies back in Detroit, upon completion of an assignment the teachers would have us all line our work up on the wall and, to our horror, one-by-one would critique each in front of us.  They would explain what worked and what didn’t work, using their expertise in the established design models, color theory, and of course some of their own subjectivity.

Almost universally we found the experience to be brutal and merciless, and quite a few students would drop out because of this group critique.  For those who stayed they eventually learned how to separate themselves from their work, and look at their design pieces and illustrations with an objective eye... learning how to not take a critique or comment about their work to heart.  The time period it took for this process to finally catch, enabling the young artist to gain the valuable ability to see their own work objectively, would naturally vary from student to student, and for me, it happened around the mid-sophomore year.  Later, when I entered another art school, The Joe Kubert School in Dover, New Jersey, many of the teachers would do the same thing.  I was quite immune to the freshman terror of the event by that time, but it was fun and interesting watching my classmates go through it – seeing their reactions to what was being said.  In my Narrative Art class taught by Mike Chen, he would allow one of the students to do the critiquing, and even though this would make the subjectivity percentage of the comments go up considerably, it still functioned the same way.  Eventually they were able to separate themselves from their work, too, and not take the critiques personally.

Because of these experiences, I know how hard it can be for the average person, and the autodidact artist, who didn’t have the benefit of that kind of training to receive a critique, whether solicited or not.  When they create, I recognize that they are still attached to that creation, and to make any kind of comment about it is to make a comment about them.  Obviously this is a natural default setting we all possess, and my peers and I were able to have the opportunity to have that connection severed, but it's important to recognize that that state is not the norm, and is by no means an easy state to achieve for the average person.  So unless the person deliberately puts themselves into a position where they will allow that severing to take place, one must be careful and use a great deal of tact when commenting on someone’s work, because to make a misstep in that area is likely to create an enemy in someone who is unprepared for it.  They will absolutely get defensive and lash out at the critic.
Posted by M. Rasheed at 1:41 PM