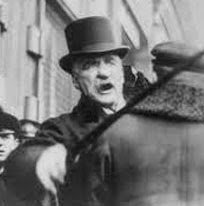 Karl Eburne - America: A country where not one of the greedy people who sank the economy saw a day of jail time...

Muhammad Rasheed - Why would they? The authors of the methods used to sink the economy (on a regular basis since the Great Depression) took the time to make sure their predatory banking techniques were passed into law. Everything they did was very legal.

In addition, the Federal Reserve Act, and the resulting partnership the US gov has with the Federal Reserve banking cartel, has ensured that the gov would remain in massive debt to them forever. Consequently, whenever the big banks overextend themselves, they merely tell the US gov they need some of that money back, and the gov HAS TO DO IT. Period. In other words, the term "bailout" was a misnomer. The US had to pay up as part of their contractual agreement in the slimy Federal Reserve Act partnership. Before the Federal Reserve Act was passed in 1913, the big banks were on their own. Whenever they overreached themselves causing a bank-run financial Panic, they had to bail themselves out from their own diamond-lined coffers, and they were hatin' life. Both the US gov and the American people were like, "Too bad, so sad, that's what you get, you greedy assholes. Give me my shit."


Today, unless we take some kind of drastic measure to alter the relationship, we just have to eat it and watch them lord it over us. Because of president Woodrow Wilson's century old betrayal, everything they do is now legal.