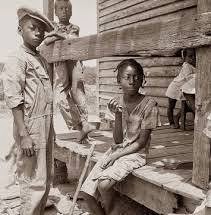 Muhammad Rasheed - In 1965, a Daniel Patrick Moynihan published a comprehensive report compiling data on the experiences and conditions of the Black American poor.  He listed the hardships they went through during slavery and jim crow, and explained how those events contributed to the continued hardships they experienced in the modern day, as contrasted to the Black American middle class who were steadily getting more prosperous, creating an increasing economic gap between the two.  In response to government measures to fix the problem using the Aid to Families with Dependent Children (AFDC) program, Moynihan warned that that particular program, in the way it was structured, would actually continue the downward spiral of the poor’s degradation.   Moynihan said that the family unit was one of the few positive things the poor had, but the AFDC’s policy of only providing aid to those families without a father in the home, would actually serve to break up the family, in fact encouraging the father figure to stay away and/or be driven away.  Such a situation, as predicted by Moynihan, would create an increase in juvenile delinquency, which would snowball into increased crime/poverty for the next generations to come.  Statistics of the time, and the statistics collected in the decades since, proved Moynihan’s warnings to be accurate.

The phrase “blaming the victim” is currently used most often in cases of violent crimes such as rape, in which the fault of the crime is placed upon the victim by the perpetrator and his defense team.  But the phrase originally came from a William Ryan, used as the title of his book written as the refutation of Moynihan’s The Negro Family: The Case for National Action report.  Although Moynihan intended the information presented to be the factual working basis of a call to action to save the poor classes of the Black American family, Ryan felt that the report did little but blame the victims for circumstances outside of their control.  Other anti-Moynihan Report vocal opponents also took this stance, making any subsequent efforts to analyze and provide concrete solutions to that demographics’ plight a political hot potato that no one wanted to seriously touch.  Over time, as the “politically correct” era came into its own, “the problem of poor blacks” turned into something of a caricature, and although everyone in the public sphere has expressed unexplored, poorly thought out opinions of the matter [see: Cliven Bundy], no serious efforts have been made to address the issue for fear of being labeled with the ‘blaming the victim’ stamp, potentially losing coveted votes.

Conspicuously, the polished rhetoric that has built up to immediately shut down any necessarily “tough love” efforts to seriously address the poor situation in the African-American lower class communities, lacks any kind of solution itself, remaining the same level of angry empty rant that William Ryan’s original work contained.   Throughout human history poverty has only been cured by education/training in valuable skill sets, combined with the practical application of those skills in action in exchange for an appropriate living wage, but the followers and descendants of Ryan’s Blaming the Victim rhetoric feel that message should not be spoken to the lower classes because it’ll make them feel bad.  That it will only remind them of their plight, and the bad memories of the past, and the idea that some of them, for whatever reason, may quit before the training/work combination is complete means that none of them should be given the opportunity to succeed through that actually successful route.

All that is missing is an actual solution from them as to what will fix the problem.  Since they are opposed to the only means of any true hope the poor have to escape their condition, being the tried & true formula of education + hard work + perseverance/determination = success, what formula do they propose instead that will cure/shrink the numbers of poor blacks and reverse the trend of growing poverty?

Pharrell Williams' journey to success, as expressed during his Oprah interview, gave somewhat of a parallel insight into the attitudes that led to the steady decline of the poor black neighborhoods, and his 'New Black' concept reflects him noticing that to reverse the trend requires a significant change in attitude as the only antidote. The descendants of William Ryan's Blaming the Victim rhetoric... equally as worthless in the modern day as it was in the '60s... criticize his philosophy as being out of touch with the struggle, while continuing to provide an opinion that is not only void of any kind of solution whatsoever, but contributes to the coddled, defeatist attitude that will continue the decades old trend of the black poor's downward spiral into disaster.
Posted by M. Rasheed at 4:16 AM