Sneaky Misdirection of the Left

Muhammad Rasheed - It occurred to me that the Left's "trickle-down" accusation towards the Right is actually a misdirection technique. The Marxist-inspired, Communist-friendly Left are ALLL about top-down politics. 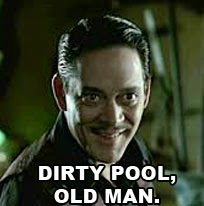 Jeremy Travis - How so?

Muhammad Rasheed - They believe in throwing all of their energy towards making an all-powerful State so that it can take control of all resources, guide the peoples' destiny, right all wrongs, redistribute wealth according to their concept of "fairness," and make sure that its citizen children work the society it designs 'from each according to his ability, to each according to his need' in the way the State's elite figures it ought to be done. If the Right is supposed to be all about the individual's freedoms upheld over a subservient government, the Left's philosophy is the opposite of that, and sees the individual as expendable. Accusing the Right of being all about "trickle-down" is a misdirection from their own traditional 'Red,' state-first-individual-second political goals.

Muhammad Rasheed - So despite all of their accusations that the Right is into "trickle-down economics" that they INSIST isn't for the good of the people, if the Left gets its way, don't be surprised to discover yourself reenacting that scene from the end of Orwell's Animal Farm -- peeking through the window at your Red Elitist handlers, confused as to why you are experiencing the same bullshit they were pretending to deride in Right Wing policies. To hell with the Right and their do-as-I-say-not-as-I-do, racist, plutocracy-loving, bullshit hypocrisy, and to hell with the Left and their Red Commie, eugenic mass killing, trickle-down bullshit.

Daniel Stone - But the "Right" and "Left" exist in name and label only. Both parties seeks top down rule over individual rights because both are co-opted by the international social and economic elite. They use corporations and corporate lobbying to make sure both parties rule in their favor. They hedge their bets and support both sides. All the while using both leftist and right wing rhetoric to convince the population at large to go along with it. The message changes according to your pre-existing proclivity while the results are always the same.

Keeping people in constant debate over whether the "right" or "left" is CORRECT is the diversion.

Muhammad Rasheed - I'm with Daniel, too. This isn't an either or. It's multi-layered.  This particular blog post is only referring to one aspect of the bigger problem.

Jeremy Travis - Then can it be said that the anarchists are right and the problem is top-down government with entrenched rulers lording over everyone?

Muhammad Rasheed - The anarchists will never be right. What we have today is flawed and needs a lot of work to get to our ideals, but it is still a great system with much opportunity for people to improve their quality of life. Coming together in a potent grassroots effort to overthrow top-down government (the type of oppressive, bullshit political system the human race has dealt with for the bulk of our existence) is the best thing we can do for our society. The real problem is being lazy citizens, and allowing others to drive our bus. Take control of your own life and stop empowering other flawed, greedy fuckers to drive your bus. Delegate leaders to run the country but make sure you CHECK them so they stay in their damn lane. Above all else, protect and maintain your human/civil rights and your freedoms. Use your superior numbers to run up in there and stomp the shit out of leaders who have zero respect for your freedoms & rights. Our relationship with the police dept is unacceptable. Governments should be afraid of the people, NOT the other way around; the hair of world leaders should turn white much sooner once they are elected... stressed the fuck out that they are going to piss us off and end up hanging from the gibbet. Anarchy represents no less than surrender, and honestly only the insane keep bringing it up as a viable option (anyone who equates it to libertarianism is just stupid and can't learn). Who the hell wants to live the worst aspects of the American Old Wild West, or the movie The Road starring Viggo Mortensen?

Daniel Stone - well everything comes down to cycles. When the world becomes to chaotic and lawless, forming hierarchies becomes a necessity to ensure safety and security. However, after a few generations, that same safety and security begets laziness, greed, and an unwillingness to exercise ones own will which results in heavy bureaucracy, despotism, and oligarchy. Naturally this then leads to anarchic rebellion. rinse, repeat.The anarchists aren't right. No one is right. There is no stationary formula for nature when nature works in never ending cycles of growth and decay. So nah, seeking out which political party or ideology that can solve all our problems is really just looking for a spot to sit down and rest for a moment while the rest of the world is running away from lava. You'll always get burned.A formula that generally works in all situations is to not be a dick to others, occasionally do good things for other people besides yourself, only follow rules you agree with, be willing to die for your friends and family, and remember to do things that make you happy.

Muhammad Rasheed - Daniel Stone wrote: “well everything comes down to cycles.”Inside of the cycle we should do our best to live at an optimum, for both ourselves and the sake of our children. Should citizens of Old Rome have had a defeatist attitude and abandoned their civilization if they would’ve known their empire wouldn’t survive past that centuries old cycle? I think you do the best you can where you find yourself, and high civilization that represents the very best of the human race’s talents and skills is worth fighting for, tweaking, preserving past the cycles and throughout the ages remaining to us on earth. Daniel Stone wrote: “When the world becomes to chaotic and lawless, forming hierarchies becomes a necessity to ensure safety and security.”When the world becomes too chaotic & lawless it means the civilized became complacent and derelict in their duties to protect what they had. Daniel Stone wrote: “However, after a few generations, that same safety and security begets laziness, greed, and an unwillingness to exercise ones own will which results in heavy bureaucracy, despotism, and oligarchy. Naturally this then leads to anarchic rebellion. rinse, repeat.”There are people among the human race who have done an excellent job of making sure they encode very specific skillsets into their children – learned in some distant age – that enable them to have a decent quality of life, no matter where they settle, throughout the centuries. But it’s something they want for their people, and work to maintain within their family creeds. No law says that we are obligated to be busted back down to the stone age at the end of every cycle. Like these folk we should actively flex our superior brain power and demonstrate of species’ ability to adapt and conquer anything planet earth can dish out. We don’t have to live like animals if we are determined not to.Daniel Stone wrote: “The anarchists aren't right. No one is right.”“No one is right” is an anarchist tenet. Of course some people are right. There are only a handful of things in life that represent basic success for homo sapiens, and the people who managed to develop and master techniques that ensure that success in their communities are the folk who are “right.” Anyone who are blown to and fro in the natural cycles of time, helpless because they don’t use their brain to figure out that puzzle, are wrong.Daniel Stone wrote: “There is no stationary formula for nature when nature works in never ending cycles of growth and decay.”By it’s nature, a cycle itself is a formula… a predictable event that can be measured and planned for. Daniel Stone wrote: “So nah, seeking out which political party or ideology that can solve all our problems is really just looking for a spot to sit down and rest for a moment while the rest of the world is running away from lava. You'll always get burned.”That’s another anarchist tenet: “you may as well not even try because XYZ.” Daniel Stone wrote: “A formula that generally works in all situations is to not be a dick to others, occasionally do good things for other people besides yourself, only follow rules you agree with, and remember to do things that make you happy.”Works in all situations to achieve what, Daniel?
Posted by M. Rasheed at 2:40 PM