No Room for You at the Top 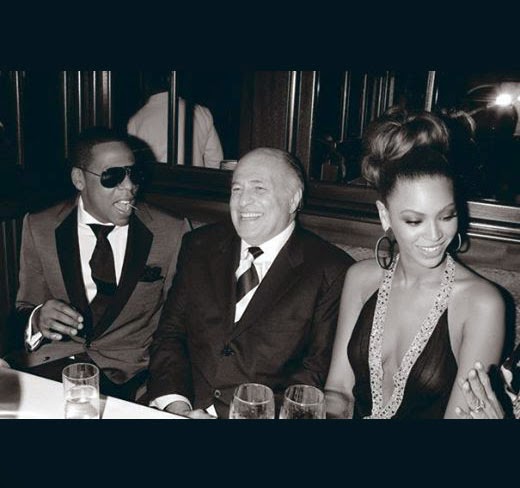 "Doug Morris' net worth nearly doubles that of Jay-Z.  So who are the real owners of hip-hop?

"Despite the perception that Black entrepreneurs like P. Diddy, Russell Simmons, Jay-Z, Cash Money [or Young Money] are moguls, they are, in actuality, the children of their respective parent companies.  P. Diddy's Bad Boy Records is owned by Warner Music Group; Suge Knight's Death row by Interscope is owned by Universal Music Group; Def Jam is also owned by Universal... What's worse is that, despite popular perception, there are no Blacks -- none -- in top executive positions of the parent companies.  What the parent companies, as well as the Black moguls, would like us to believe is that "the R.O.C. is runnin' this rap shit."  This is why Jay-Z is touted as the 'C.E.O. of Hip-Hop.'"  ~M. K. Asante, It's Bigger Than Hip-Hop: The Post Hip-Hop Generation, p. 111-112

Muhammad Rasheed - The 1% will fight to keep you from coming over to the other side of that table.  Will Smith's family tried to make just such a power move with their creator-owned After Earth film -- they planned to use the profits (that they expected to match Will's typical blockbuster numbers) to finance their own studio, mimicking Tyler Perry's path.  But before After Earth even came out a MASSIVE anti-Smith Internet attack started and gained momentum, focused on how horrifying it suddenly became for the fact that wealthy Hollywood stars traditionally gave those same opportunities to their children... an attack against nepotism that oddly began and ended with the Will Smith family alone.  When the movie came out it did uncharacteristically poorly because of the unreasonable and mysterious attacks, and Will responded: "That's unfortunate."

The fact that my own people joined in on that bullshit against him makes me FURIOUS.

Jerry Lee Brice - Jealousy... nepotism is nothing new or unusual in Hollywood...

Muhammad Rasheed - There's a cartel of about six studios in Hollywood, and like all cartels and monopolies they hate competition, and prefer to keep those weekend premiere profits all to themselves.  Consequently we tend to see the same types of stories pushed forward from the same narrow group of mindsets in almost every movie, filtered through one particular demographics' viewpoint, which the masses assimilate as a "mainstream truth."
Posted by M. Rasheed at 2:44 PM