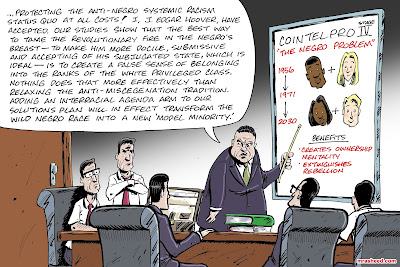 Muhammad Rasheed - Cartoon depicting the paradox of the long-time politicized nature of interracial relations as a symbol of anti-racism progress, while it actually benefits the oppressor class in holding back Black Empowerment.

Dee Curry - That was the goal of Australia in the last century, only they did it forcefully by taking children from their Aborigine parents and only letting them mate with whites.

Brandon Smietana - What methodologies did the US government use to select groups as targets for COINTELPRO operations?

Muhammad Rasheed - They targeted any group that threatened the White Supremacist Ideology status quo, and/or the short and long term plans of the 1% elite class.

Deonte L Hollomon - You should be ashamed of yourself for this.

Deonte L Hollomon - I didn't think you would I just said you should. Decency and integrity is something sorely lacking in most people nowadays so your response kind of just fits in

Muhammad Rasheed - Meanwhile, it should be clear that I think the lack of decency and integrity is exactly what I'm critiquing. :)

Pax Negro - @Muhammad... i agree with you. when the last time you seen black couples on tv and movies? You see ir couple and a lot of white couples. I was in a conversation where most people think mixed babies will end racism.

Muhammad Rasheed - lol The "slave mentality" is to just accept being pulled along by the ring in your nose to the tune of whatever the mainstream establishment programs into you as truth.

Free yourself from that, please. Exclusively chasing after white women like they are some kind of special prize—or the magical key to the slave shackles designed just for Black men—is not a free mentality. Not even a little bit.
Posted by M. Rasheed at 12:06 AM