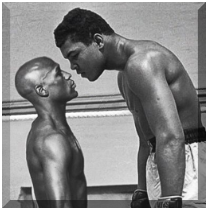 Is it possible that Floyd Mayweather, Jr. was technically a better boxer than Muhammad Ali was?

Muhammad Rasheed - Floyd Mayweather, Jr. was absolutely a better technical boxer than Muhammad Ali. Ali hated the techniques of boxing since he was a teen, and refused to listen to his trainers. That's why his style looked the way it did, because he literally did what he wanted to do and ignored instructions to "do it by the book."

So why was he as good as he was though? Because of his natural talent/gifts (speed, accuracy, courage), and his willingness to get in the gym every day and practice, Practice, PRACTICE until he created a style that worked for him. Ali's long-time trainer Angelo Dundee used to remark that Ali "did everything wrong, but it turned out right." That means he never learned the correct technique (boxers are NOT trained to pull their head back away from punches the way he did all the time, for example), but Ali's brute determination, talent and fortitude made the wrong techniques that he did practice transform into a style that the world's greatest prize fighter used to cement his legacy for all time.

Dave Khela - Ali’s incredible athletic, gifted talent is what allowed him to do things no others could . that said, Floyd is on a level of say Benitez and Whitaker .. great defensive fighters but by no means better technically per say … plus floyd selected his opponents carefully, we dont know how he would have handled certain fighters, had he met them.

Muhammad Rasheed - In addition to Ali's gifted talent, it was his flagrant disregard for the orthodox technical side of the sport that enabled him to "do things no others could." By definition he was not technical, and all orthodox boxers are trained to exploit and counter the technical techniques that they were also trained in. Ali gave technical fighters trouble because his style was non-technical.

Floyd, on the other hand, was superbly trained in the technical science of boxing, and even innovated his own techniques as a master of his craft. Floyd was a more technical boxer, and – like Ali – was gifted as an athlete and could break the rules at will because his intellectual and physical gifts allowed him to do so without penalty. Floyd's technical mastery gave him a tool kit of varying options to choose from when pitted against numerous styles of opponent. By contrast, Ali's repertoire was limited to the one-style-fits-all moves that he stubbornly stuck to throughout his early training, and when he would (rarely) encounter fighters who were capable of solving his unorthodox puzzle, he often would be incapable of adjusting his style to stay ahead of them, the way Floyd was able to do.

Dave Khela - we are probably too vary different age groups and i respect your opinion .. but to put floyd that high on the pedestal is unfair as he Never fought the “Lions” of his day while said “Lions” were still roaring .. we dont know how he would have adjusted, when a relentless fighter in his absolute prime wouldnt allow for a “points” victory by floyd .. i will say floyd is one of the best ‘defensive’ fighters, but defense wont always win...

Muhammad Rasheed - It looks like Floyd's outstanding boxing record disagrees with your comment Re: whether defense always wins or not.

I love Ali, too, Dave. I consider him an inspiration and an influence in my life as many others do, and I have done so for almost all of my nearly 50 yrs of life. My responses on this subject are based on an objective analysis of both fighters separate from my high admiration of the two of them as legends in their very different times.

You mentioned "fairness" here. If we were to be fair, and address the question as asked, then we would notice that what made Floyd successful were a combination of the same items that made Ali successful (courage, toughness, speed, great elusive defensive) PLUS items of his own (innovative defensive techniques that are now taught by coaches around the globe; the ability to switch to different technical styles in his well-trained arsenal). Objectively, this comparison of what they proved to be able to do in the ring demonstrates that Floyd was technically a better boxer of the two.

Outside of these items, what made Ali soar into "greatness" was his personal charisma, his political battles/influence, his commitment to a progressive "right side of history" position, his continuous ability to defy the odds and achieve what seemed to be the impossible. These are the areas that enabled the legend of Muhammad Ali to transcend the sport of boxing, and the reason why people bristle in outrage at the audacity of comparing him to a 'mere' boxer like Floyd. I understand this phenomenon completely, but in a discussion in which we ARE 'merely' talking about Ali's boxing skills, then his legend must be carefully folded, and set outside in the hall so it doesn't distract us.

Dave Khela - fair enough and i respect your views .. i still feel a fighter who didnt really “push his limits” and or “test himself” cant really be scrutinized fully to gauge him properly .. Ali fought and Beat Men who were supposed to Kill him, he must have “Skills” :) .. ps, im 61 .. Peace to you brother

Muhammad Rasheed - I understand what you mean about the "push himself/test limits" comment, but how do you know that Floyd didn't do that in the gym, and its specifically why he was the consistent pound-for-pound dominating champion of his era?

Remember that the public's perception that the hard-hitting monster foes of Muhammad Ali would kill him were based only on their underestimation of Ali's skills. A young but extremely hardworking Ali danced around Liston and humiliated him, but the public was POSITIVE Ali would be silenced. Ali told the press upfront that it was experience that would enable him to defeat the unsophisticated and relatively green Foreman, but the public was POSITIVE Ali would be annihilated. There are similar parallels in Floyd's career, where he outworked and defeated opponents (Castillo, De La Hoya, Hatton, Canelo, Maidana) that the public thought he had finally met his match against. In both Ali and Mayweather's cases, it was the public's perceptions that were at fault. We can't tell which one wants it more, which one worked harder/smarter during training based on our biases alone, Dave. lol

Now with that being said, here's another interesting point relevant to this: Those times when it did seem that Ali had met his match, or fought an opponent that pushed him to his limits were almost always shown in matches that Ali had taken his opponent lightly, and didn't train well for the match! Thus the fight ended up more competitive than it would have been otherwise. The first Leon Sphinx fight is a prime example of this, and even the first Frazier fight. Actually Frazier and Norton had both the will and skill respectively to both bring their A-games and figure out Ali's confusing, unorthodox style. If Ali wasn't in top physical conditioning going into contests with those gentlemen, then he would lose. Unlike Floyd, Ali had a history of coming into fights at less than his full power if he didn't think much of the opponent. Floyd ALWAYS brought his A-game, and "cried in the dojo so he could laugh on the battlefield" and was NEVER lazy.

Floyd Mayweather, Jr. pushed his own limits, and tested himself and that's why he's undefeated. Ali needed other people to do that, couldn't consistently achieve the self-motivation he needed while in the gym, and that's why he has 3 of those 5 losses on his record (the Holmes and Berbick losses were acquired while he was experiencing Parkinson's symptoms of course).

Dave Khela - there are alot of opponents who he avoided though, if you do your research you will see .. he also weight drained his opponents and or, had specific terms which were to his advantage (research the Marquez fight) .. Floyd was a great fighter yes, but he and his resume is ‘cloaked’ to a degree .. you just need to research all the fighters he didnt fight and ask yourself Why he didnt “Unify” .

Muhammad Rasheed - "Avoided" is a strong word, and it reflects bias rather than insight. Since Floyd proved himself an exceptional businessman, it's far more likely he didn't seek matches with those fighters because doing so wouldn't have enabled him to further the career path he had meticulously planned. Along that path he had no problem fighting truly dangerous opponents (listed above) who had more than just a puncher's chance of defeating him, and made those fights happen as soon as he could both for the fans who expressed interest in them, as well as for his own challenge as a professional.

Are you really going to admit that Floyd Mayweather, Jr. was a great fighter, and then hint at cowardice in the same breath? An objective analysis of his career reveals he was as brave as they come.
Posted by M. Rasheed at 3:44 AM