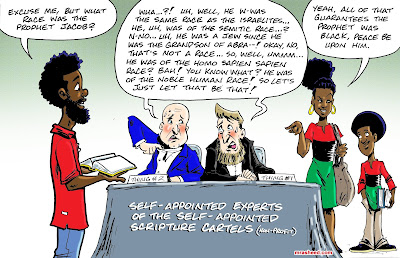 Muhammad Rasheed - Of course they both were of the Black race, which was common knowledge in the pre-white supremacist, historical whitewash era.

The typical mealy-mouthed, hummin' & hawin' responses to straight forward questions like this—that probe underneath the Eurocentrists' historical whitewashing—give away the nature of slip-shod retcon efforts when there is so much evidence contrary to what the white racist aristocracy wants the masses to believe as fact.

This is all comical considering it’s this very group responsible for the deliberate creation of “race” as we know it today. They are the ones who developed the racial designations of Caucasoid, Mongoloid and Negroid, they invented the “Intelligence Quotient” (IQ) grifter scam, as well as the accompanying pseudo-scientific, white supremacist ‘bell curve’ analysis, but suddenly they don’t know what you mean by “race” when confronted with a direct question challenging their foolishness.
Posted by M. Rasheed at 10:34 PM