MAGA On My Left 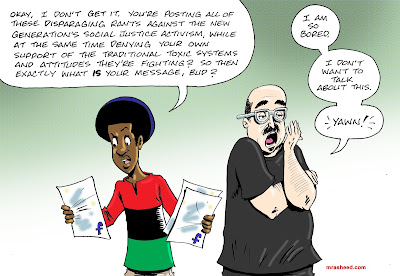 Tyler Timm - Why do some conservatives think liberals are the racist ones?

Muhammad Rasheed - It’s just a tu quoque logical fallacy demonstration, typical from the right since they don’t actually have an argument and can’t defend their own blatant racist positions. So they tend to throw everything they have into offense which can be effective in the limited short term because they know that the left does indeed also practice racism against the Black community constituency. It's a tricky battle strategy, because there are things the conservatives know they CAN'T point out the left does without the thread leading back to their own right-wing dirty, racist wealth coffers, too.

Individual white liberals often lean conservative the older they get, but as a group they frequently practice a passive aggressive racism against Black people whom they string along with promises of a fully achieved progress that grows further and further away with each passing decade. Blacks can certainly reverse this trend by unifying into a strong special interest political force of their own, and working within the Democratic Party to achieve the Black Empowerment and Economic Inclusion that has long eluded them. The tendency to complain and wait for party leadership to take the initiative and do that work for the Black community is a silly pipe dream doomed to more failures.

Mustafa Muhammad - Peace and blessings, Am I to understand that protests without actions bore them? Is this the ethos personified, if so overstand the greater of two evils is bored also. How do you struggle without using your muscles

Muhammad Rasheed - It would appear that the boredom announcement came solely from being asked to clarify his position to the point where he would become "bored" on cue. It has now become a running gag, and thus ripe for caricature.

Peter Nack - @Rasheed... I don't see MAGA-ism running beneath the Liberal-Left community; rather the opposite. There is a forlorn sense that the promise of the '60s and on have been so thoroughly squashed. There is a sick-to-the-stomach feeling that we have been badly outplayed by the Right (which, backed by big $ and evangelicals, played a long game.) ..... That said, some of we oldsters don't get some of the new generation's social activism (#blacklivesmatter, most of all I think.) ....... But consider the ancient wisdom of Book of Ecclesiastes: "The thing that hath been, it is that which shall be; and that which is done is that which shall be done: and there is no new thing under the sun.” ..... The Struggle has a long history. ..... Appreciate your work.

Muhammad Rasheed - Peter wrote: "That said, some of we oldsters don't get some of the new generation's social activism (#blacklivesmatter, most of all I think.)"

Remember when the Union soldiers abandoned the newly-freedmen to the barbaric Southern domestic terrorist groups, stripped away all the gains of Reconstruction and began the century long lynching era before implementing the jim crow second class citizenship laws? And then we found out that while jim crow was going on in the South, the North was just as enthusiastically preparing the prototype for the modern mass incarceration industry, only to spread the model South after the Civil Rights Act repealed jim crow?

The new thing under the sun is racism. That's new in the history of the human race. In this country it's guarded and protected across partisan, class and even racial lines. What's so hard to "get" about the anti-police brutality focus of #BlackLivesMatter? You don't get it because my goals are not your goals, even while you pretend otherwise.

Tica Mcgarity - The United States is unique in that it is in a constant state of change. We have already terminated many of the old toxic institutions that you seem to be referring to. The next toxic institution that we will probably impact is our system of welfare ... because, rather than lifting people out of poverty ... our current welfare system institutionalizes it. We actually solve problems. Sadly, the only thing that get coverage in the popular press are the screaming mobs of protesters who are so good at complaining... but not quite as good at proposing workable solutions.

Muhammad Rasheed - Tica wrote: "We have already terminated many of the old toxic institutions that you seem to be referring to."

If that were true there would be no America.

Tica wrote: "The next toxic institution that we will probably impact is our system of welfare"

This is your white conservative partisan rhetoric again and it lacks value for me since it is divorced from truth.

Tica Mcgarity - Sooo.... truth now is contingent on skin tone? How very racist of you.

Muhammad Rasheed - lol That comment of yours is a deliberate strawman effigy, and it was very deceptive of you.

Tica Mcgarity - You are totally clueless. I have been on government giveaway programs. I was told by the state employee that once on the program... 'they had me for life' It is just another form of slavery and it has nothing to do any ethnic criteria.

You should talk to your fellows more and get read into the script, Tica.

Tica wrote: "I was told by the state employee that once on the program..."

Why did you believe this person? Because you wanted to?

Tica Mcgarity - I don't generally talk to myself. Interesting that you would suggest this.

Muhammad Rasheed - I don't know what that means. lol

Tica Mcgarity - It means that I am commenting on my own, personal experience.

Muhammad Rasheed - Thanks for playing.  :)

Tica Mcgarity - Bigotry. A position that dismisses any and all facts that may contradict a predetermined viewpoint on any subject. AKA prejudice. You would fit in the Bigotry and Prejudice Club nicely.

Muhammad Rasheed - I'm not bigoted against your ethnic group or class, Tica. I only hate the White Supremacist Ideology. That's all.

Tica wrote: "A position that dismisses any and all facts..."

I'm sorry, but anecdotal logical fallacies are not facts. Neither are your Reagan-era political talking points. You may safely discard the lot of it that you may finally be open to truth.

I'll pray that you are eventually successful in this endeavor.
Posted by M. Rasheed at 10:01 PM