The True Origin of Racism 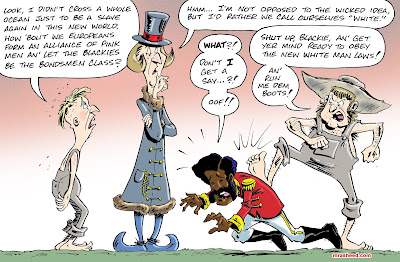 Felix C Ber - Will racism ever cease to exist in the U.S? Will we see a day when racism is something in the past?

Muhammad Rasheed - It’s not impossible. The last time racism was almost wiped from American society was when the anti-Black racist economic system collapsed following the Civil War. Despite some twitching during its near death throes—like share cropping and the proto-mass incarceration “inherent Black criminals” propaganda—the rapid socio-political-economic rise of Black people during Reconstruction seemed like racism was pretty much over.

And then the lower class whites took the death of racism VERY personally, and decided to bring it back by introducing domestic terror. Despite the ferocity of the white terror group attacks throughout the country, oddly it didn’t kick start another Civil War, and racism just grew progressively worse.

It seems clear looking at the record of history, focused on the fact that all the rudimentary freedoms Black people possess today comes directly from the Civil War effort, that if the dominant oppressor class refuses to dismantle anti-Black systemic racism and payout Reparations justice for the atrocities and plunder committed, then only another Civil War will repair the imbalance and cure society of its most enduring sin.
Posted by M. Rasheed at 10:49 PM