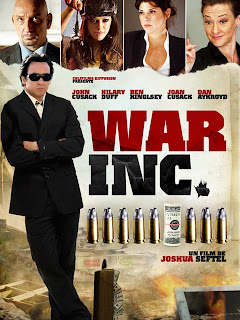 Muhammad Rasheed - Did you know that John Cusak and team made a sequel to the 1997 cult hit 'Grosse Pointe Blank' called 'War, Inc. (2008)?'  I had no idea.  It revisited the same characters in a sharp, no holds barred & funny critique against the barefaced-unashamed modern form of the Industrial Military Complex.  The line "This is a historic moment... the first war ever to be 100% outsourced to private enterprise" from early in the film sums up the force of the critique.

scarmenl - No wonder johns career ended you can't piss of the two legged demons and expect no blow back.

Muhammad Rasheed - "ended...?" But he made 22 movies after this one, including an EXTREMELY profitable blockbuster. I don't think "ended" means what you think it means.

The only blowback was in the form of THIS particular film not being allowed to receive the full promotional treatment package. I'm surprised that they didn't also stamp the nonsense label "vanity project" on it, too, which is the typical deliberate Hollywood snub comment.

I loved 'Gross Pointe Blank' and as a movie goer would have genuinely wanted to know that the same characters were revisited by the original creators. That was how Cusak's hand was slapped, by denying the project the ability to reach as many people as possible, demonstrating that the enemy is remarkably willing to take a paycut to keep you from countering his indoctrinating message. His lust for total power over the masses reigns supreme over his love of wealth hoarding.

The Blatant Sabotage of a Man Trying to Help His People
Posted by M. Rasheed at 9:37 PM