Strategizing on the Campaign Trail 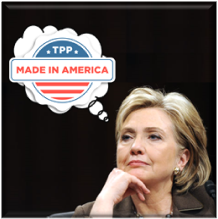 Gerald Welch - Here are 24 times Hillary Clinton PRAISED the Trans-Pacific Partnership (TPP) and helped implement it as Secretary of State.

Rick Drew - Of course - because it can cost her votes.

Mark Champion - I am not a support of her but to be fair...she was not the boss so she was just following the bigger misfit's orders. She could truly have been against it or it is plausible deniability.

Gerald Welch - Except she has done this with multiple issues, whether she was SoS or not...

Mark Champion - Oh i am right with ya on this but i see how she can double talk her way out of it.

Muhammad Rasheed - The TPP fixes the NAFTA policy, and returns to the country what was lost.

Phillip McKnight - So why is Hillary opposed to it, if that's the case? I haven't read TPP, just bits and pieces of it and from what I've read it just gives Asia the same benefits Mexico and Canada got from NAFTA.

Muhammad Rasheed - She's opposed to it on camera because her dedicated partisan voting block assumes that it is a GOP item that is just NAFTA 2.0, the same as all leftists assume. The public has already made up their mind about the matter, and she is powerless to convince them otherwise. This puts her in a bad spot because, like Gerald and Rick said, she NEEDS their votes.

In turn, the right assume it's bad for no other reason than because Obama was pushing so hard for it.

Muhammad Rasheed - The Trans-Pacific Partnership (TPP) is actually full of pro-Middle Class items that will provide a wealth of opportunity to grow our manufacturing class through the tech industry, partnered with Obama's college loan reform, with the Common Core item, and with the 100,000 tech jobs initiative. It's part of a long-term goal package that will bring back the American Middle Class growth lost with the implementation of NAFTA. TPP reverses NAFTA by opening doors on the Asian side of the globe that NAFTA closed with Canada's and Mexico's help.

Phillip McKnight - NAFTA was supposed to do great things, too. It did, just not for working people in the United States.

Gerald Welch - So why is she against it now?

Muhammad Rasheed - The campaign game strategy. It doesn't go deeper than that. If she wins the presidency, she'll flip again. On cue, since it doesn't make sense for her NOT to be pro-TPP.

Phillip McKnight - I'm not even clear on the current status of TPP, I just don't want to see the Asian version of NAFTA put a few more nails in the middle class coffin.

Of course it IS a compromise package, with pet partisan items from both sides of the aisle in it, but the POTUS believes that the items he was able to put in it to further his legacy agenda will be worth it. I believe him.

Phillip McKnight - He also said if you like your doctor you can keep your doctor. That hasn't turned out to be the case, not that I blame him, but still, he said it, and that hasn't been the reality. Point being, he was wrong and I don't want him to mean well but end up wrong about this, too.

Muhammad Rasheed - So, because the red states decided to reject Obamacare -- just to try and sully his legacy -- that means he was wrong in principle? That of the millions of people that did take part, the system didn't work exactly the same way for some of them, so that means it was a failure?

I have a fundamental problem with this concept, Phillip.

Phillip McKnight - Where did I say Obamacare is a failure? I have a fundamental problem with what I say being misrepresented. Hey, brother, I'm a Democrat, voted for Obama twice, but I'm moving beyond taking partisan positions just to be part of the team. You're barking up the wrong tree.

Muhammad Rasheed - Considering the original status post author, and his opinions on such topics, that colored your post to look a certain way to me. I assumed you were saying you thought it was a failure through that lens, despite the highly successful college loan reform actually being built into Obamacare (which I think is amazing) so I get easily defense about it.

Phillip McKnight - My apologies for not being more clear. Anyone that truly understands what transpired with Obamacare knows that Obamacare would have been vastly successful if over 30 Republican states wouldn't have fought it with everything they had. They want nothing to do with changing Healthcare from what it was before Obamacare. I loved old Mitch McConnell, who just changed the name of Obamacare, and said how successful it was for his state. If they had just worked on it, as it is very complicated, instead of dismantling it. It would be so much better right now, them's the facts.

Muhammad Rasheed - Yes, what we got was the 'Plan B' of what the POTUS really wanted, but in the first go around of amendments to flesh it out, the college loan reform piece was added. That more than anything, I think, is why the enemy wants to dismantle it now. The big banks are losing billions upon billions by being forcibly removed from the middleman position in that process. You KNOW it's eating them up.

Scott Rocky - Uhm, it fixes nothing, and opens up the pathway to even more jobs going off shore. It also ends tariffs that were in place to protect certain American industries (such as sugar growers and textile manufacturing) It is going to increase the numerical limits set in place on certain foreign workers in the United States, which means even more American Jobs gone. It raises privacy issues for certain countries, such as Australia which has privacy laws for its citizens that are now void.

Scott Rocky - If it was such a good deal, why did they do it in secret? NAFTA, as crappy as that was, was at least presented to the people before it was passed.

Korac MacArthur - Its not "free trade" if its negotiated in secret and takes over 1000 pages to express, sorry..

Korac MacArthur - You have to see the big picture. Obama knows its flawed as a strategy to make people demand single payer down the road, which he thinks is better. He is very foolish.

Phillip McKnight - I think all insurance consumers (everyone) would like to see rates go down, I'm not arguing the merits or criticizing the problems of O-Care, I was merely stating the facts surrounding the implementation and the resistance of the implementation of the law.

The President can’t demolish laws put in place by a previous President, so he was powerless to remove NAFTA altogether. But he could work AROUND it, working with Asian partners to expand opportunities that do not directly conflict with it.

Scott Rocky wrote: “…and opens up the pathway to even more jobs going off shore.”

More importantly, as the Obama Administration invested heavily in the growth of American math/science/tech in the long-term, the entrepreneurial immigrants from off shore will be coming here to take advantage of the newly fertile tech markets, creating new business, competing with the future boom in new American tech business, and eventually creating a brand new era of innovation with America in the lead again.

Scott Rocky wrote: “It also ends tariffs that were in place to protect certain American industries (such as sugar growers and textile manufacturing)”

The removal of market restrictions is a good thing, as it will increase competition and lower prices of goods for the consumer. The removal of restrictions will also enable smaller businesses… who were excluded from the big business cartels that the tariffs protected… to enter the markets, increasing job growth.

Scott Rocky wrote: “If it was such a good deal, why did they do it in secret?”

Obama’s pro-tech/science part of the TPP needed to be put in place soon in order to take advantage of the above mentioned tech items he initiated within his “Middle Class Growth” agenda. The so-called “fast track” used to push both trade agreements through the ratification process basically excluded the review of the legions of special interest groups in order to take advantage of the “hot” market conditions that the Obama agenda cultivated during his historic terms.

Muhammad Rasheed - Korac MacArthur wrote: “Its not ‘free trade’ if its negotiated in secret and takes over 1000 pages to express, sorry..”

Korac MacArthur wrote: “You have to see the big picture. Obama knows its flawed as a strategy to make people demand single payer down the road, which he thinks is better. He is very foolish.”

He’s far from foolish, and strategizes for smaller gains through compromise with his rivals, over gaining absolutely nothing by stubbornly sticking to partisan "all-or-nothing" deadlocks, and spending his terms engaged in impotent and bitter back and forth battles (like a president sanders would have done). Also the President is a believer in the very non-foolish idea of putting in place templates that future like-minded Presidents can build upon later.

Reagan versus Obama
Posted by M. Rasheed at 3:06 AM