Looking Back with Regret 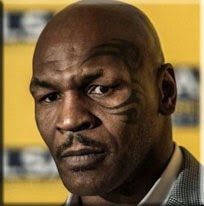 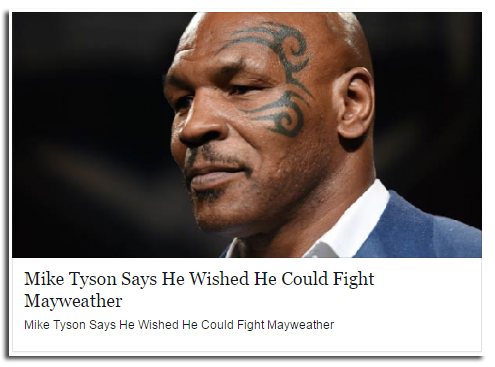 Mike Tyson Says He Wished He Could Fight Mayweather

Efrain Aviles - everybody needs the money

Eddie Xmith - No contest.
Nobody could beat Iron Mike in his prime.
No Body

Muhammad Rasheed - Did you get past Holyfield and Lewis?  Then shaddap.

Mayweather would've run circles around you.

Eddie Xmith - He fought neither of them in his physical and mental prime.

Muhammad Rasheed - ...and he wished he could've fought him for what? For the payday? Why doesn’t he just make more movies and hush?

Mike abandoned boxing during the peak of his popularity, and destroyed a potential excellent legacy. I don't want to hear that nonsense from him now.

Muhammad Rasheed - Eddie Xmith wrote: "He fought neither of them in his physical and mental prime."

That's the thing: Tyson's head was his biggest weakness. He had the talent and skills and threw them away because he was unable to focus. In the end he proved that he didn't have the heart of a champion. That's why he's talking this way now, because he looks at Mayweather carefully crafting his own legacy in the sport, and he's jealous.

Muhammad Rasheed - Don't look back with regret now, Mike. Those days are gone. Look forward and do something different now. Continue to develop those relationships with Hollywood. They love you over there.

Eddie Xmith - @Muhammad... I will conceed. You are 100% correct in your account.  Tyson failed. He worn the belt but failed to be a champion.  And his greatest weakness was that of his charactor.
Posted by M. Rasheed at 3:44 PM