For the People - The US Government Working as Intended 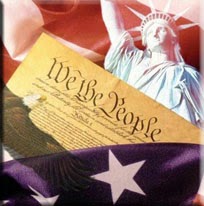 What does that mean exactly? It means that the government should be scaled back so that it is restricted to providing mostly its primary function: To enforce the law.

The people determine what is important to them, laws are drafted up that define those items, and the government enforces those rules. This is the heart of our successful civilization at work.

As an example, look at this “Internet Neutrality” item. It began when certain mega-corporations made an attempt to monopolize the Internet’s Free Market – a marketplace that had been working pretty well for everyone up to this point as free markets usually do – by trying to get their politician cronies to pass laws that would enable providers to determine what content became available, controlling which messages were accessed faster, etc., so they could become richer at everyone else's expense. The people said they didn’t want that at all, and the Federal Communications Commission agreed it was a major concern to protect the Internet Free Market, passing laws in the people’s behalf that would protect it from corporatist monopolies and cartels.

This action demonstrates a government that is working the way true American patriots claim they want their government to function, and what Libertarians and Republicans claim that they want. Any talk that you read or hear saying that the FCC’s ruling is a bad one (“Now they are going to take over the country! This is another step in a socialist take over! The government is secretly trying to monopolize the Internet for itself! Next they are coming for our guns!”), is coming from either your enemy, or a brainwashed slave of your enemy. There is no grey area here.

See Also: Do You Like the Internet? Here's How to Protect It!
Posted by M. Rasheed at 4:52 AM