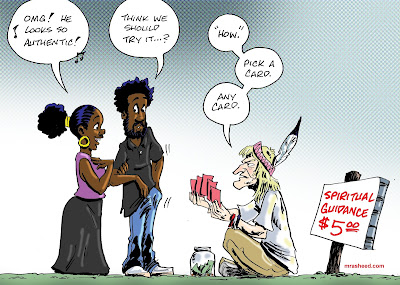 Anonymous - I’ve seen self-declared yogi masters levitate just with their mind? Is it because they awakened and opened their third eye or are they tricksters?

Muhammad Rasheed - In addition to his/her role as healer and keeper of a culture’s knowledge stores, the shaman position also has a long history of performing stage magic tricks. Street magician and endurance artist David Blaine chronicled his globe-trotting adventure when he met shamanistic magicians in simple little quasi-untouched villages, and dueled each one in magic. Every time he would recognize the trick his wily opponent would perform, showing the longevity and range of the folio of legerdemain techniques.

As entertaining as this ‘magic battle tournament world tour’ was, it also revealed how integral the performing arts, stage craft and even greed-fueled grifter schemes are to the ages old community of “spiritual masters.” How these tricks could have originally become established within their tool kit is clear, since the small village shaman needs to “prove” his knowledge and ability to the community as evidence of his authority and power, while true magic is very personal. The only provable fruit of true magic is insight and wisdom – which may not be strong enough evidence to convince the untrained lay villager to justify supporting this character as a professional “spiritual master.” Consequently, to justify his job the shaman finds himself performing tricks to inspire awe in the willfully gullible villagers, so they will be sufficiently satisfied that work is actually being done and they will go away. Or give up valuables. Or whatever. In larger communities, such as the Ancient Egypt of the prophet Moses’ day (peace be upon him), we see a network of shaman-magicians who used their skills to not only build and maintain those famous mystery systems, but also to grift the royal court to fund their lifestyles. And of course they weren’t the only ones. The spiritual master/magician priest role was lucrative for that tight-knit secretive crowd and practiced all over the world. Note that when confronted with the Holy Signs that the One God instructed Moses to show to Pharaoh and his court, the shamans immediately fell to their faces in awe and surrender. They recognized true magic; they knew it when they saw it from their studies, but had become jaded and skeptical because their greed-driven lifestyles severed themfrom the ability to personally experience the deep mysteries (see: The Christ’s instructions to the rich young ruler)

In our modern society, the performance tricks of the old shaman have been isolated away from the healing arts and make up the foundation of the modern entertainment magic body of techniques. But in other areas, they are still being practiced to impress a potential ‘mark,’ which includes the stage craft and charismatic smooth talk of the modern “spiritual master” entrepreneur.

The best way to keep from falling for these scams is to be aware that real magic is small in scope within the confines of this finite material universe and experienced only on the individual level. Even though it requires a strong personal discipline to consistently perform, the checklist of instructions is thankfully very short, simple to track and readily available for free. Real magic isn’t big and flashy with obscene razzle-dazzle. If the so-called ‘yogi master’ is trying to demonstrate superpowers in front of you that are little different from the performances of David Blaine, Chris Angel or David Copperfield (or even the roadside snake charmer), it’s definitely fake.