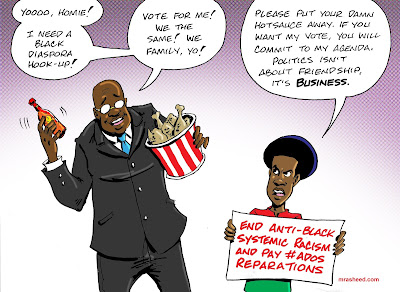 Muhammad Rasheed - Senator Kamala Harris (D-CA) is a Black woman based on the physical characteristics of racial phenotype. However, she is not a member of the American Descendants of Slavery (ADOS) ethnic group — commonly known by the less accurate designations of “African-American” and “Black American” — but instead traces her lineage and heritage through her bi-ethnic Jamaican and Indian Brahmin family strains.

Despite this, Sen. Harris has made dubious attempts to self-identify as ADOS in her efforts to court the vote of the traditionally loyal Democratic Party ADOS group to boost support for her 2020 presidential nomination bid. For example, during the Democratic Party primary debates, she made a big deal about her being part of the school integration busing program as a child, even though her own successful immigrant family had a full range of socio-economic options to choose from unlike the ADOS community members the program was actually created to help.

It is worth noting that Sen. Harris has pointedly resisted addressing the ADOS Political Agenda as of 30 Jun 2019, and clearly seeks to use her ability to physically “pass” as ADOS to take advantage of the ADOS story for her own personal career come-up, without giving them back anything tangible in return.