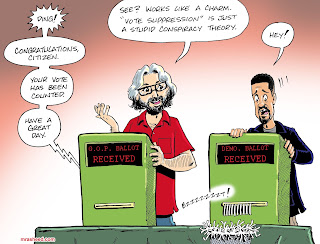 Mike Beckom - @MR... you can't possibly buy into this load of crappola, can you? Voter registration is bad? Proof of citizenship too? How so? And voter spoilage? Seriously? How exactly does the voting machine figure out your race or ethnicity? Dude, I understand that you're not enamored with the present administration. I get that you feel like minorities are getting the short greasy end of the stick. We ALL get that. It's in everything you post be it articles or toons. How do you function? If I carried around all that hate, all that anger and angst, I'm not sure I could get outta bed in the mornings. You are much too intelligent to ascribe to some of this blatant stupidity.

Muhammad Rasheed - There's a lot of research that went into this body of information, Mike, and I've been following it for a while now. Many of the techniques involved were resurrected from the 1870s era when the aristocracy were actively stripping away the gains of Reconstruction, working to disenfranchise the Black community from the political process. So now they're back, with a few extra toys added from the digital age, but the purpose is the same as it's always been. So yes, I do tend to buy into facts.

I'm more inclined to look with suspicion upon someone who demonstrates they haven't researched the material (your questions are answered in the vid clip below btw), but seem over-eager for me to look away from it, especially when it involves the topic of my life's work.

Muhammad Rasheed - Mike wrote: "If I carried around all that hate..."

Several months ago, I came across some quotes from a white conservative radio personality who said that racism is the fault of Black people themselves. He said that if they would just learn to let go of their resentments, and turn the other cheek and forgive whenever a Dylann Roof situation happened, then racism would go away. Is this the spirit you are coming from when you talk about "all that hate?" I hate the white supremacist system that plunders my people to feed/maintain the racist aristocracy, increasing the wealth gap. Any moral, righteous and freedom-loving people should.

Mike wrote: "...to some of this blatant stupidity."

I'm not sure what part you are calling 'stupid.' Is it the FAQ from Greg Palast, the voter suppression apparatus, or the effort to expose it as the evil scam it is?

Mike Beckom - the blatantly stupid part is questioning voter registration. Or voter suppression. Yeah, I've seen the redistricting plans of big govt. They work the voting districts around to benefit whomever they wish, whenever they wish. I've also been privy to the blatant stupidity of others. I lived in a part of SC where the population was 80/20 - black to white. I went to vote one fine sunny afternoon and found (at the prescribed distance away from the voting center) a couple of young black gents who were passing out....get this....sample ballots. They were imploring other people of color to 'vote the way this is marked'. I asked for one and was rebuffed. When I inquired why I couldn't have one, I was told I didn't need one. I then went on the offensive and asked....is it because I'm white? Perhaps it's because I'm capable of making up my own mind - which seems to be in contrast to what you're implying by passing out these 'examples'. I told them that they should go home and do something constructive with their lives instead of insulting others with their propaganda. How is it wrong to ask someone to prove their citizenship before casting a ballot? Businesses ask for proof of id for entry, to buy things, etc. Seems like with this being one of our most basic fundamental rights as CITIZENS....no real citizen would have a problem providing it. As for voting - I firmly believe everyone should make up and vote their own conscience. Otherwise, they are merely doing the bidding of others.

Muhammad Rasheed - I understand the official political justification stated for why voter registration laws were put in place, and from within the shallow confines of the surface film it seems to make sense. However, the practice and procedures of how these laws are consistently implemented reveals them as only a classic tool of voter suppression to disenfranchise a targeted group.

This article linked below reveals how slimy the practice is when GOP officials in NC were busted a couple years ago, before they learned to hide their slime better: