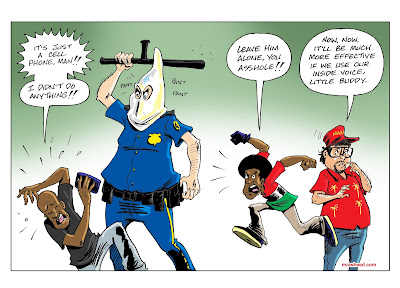 Alan Groening - What era is this fictional cartoon supposed to be taking place in, Muhammad Rasheed? 1950's? 1960-69?

Muhammad Rasheed - It was inspired by an incident that happened 2 months ago.

Alan Groening - California.... Sacramento, our state Capitol go figure. I feel for Stephon Clark however, do you have actual proof that the Sacramento police officers who shot Stephon were, in fact, members of the KKK or even white supremacists?

This is a tragic incident to be sure, the video implies the officers were in "fear for there lives" and may have shot out of fear but shooting a "suspect" 20 times is excessive to me, and then leaving him to bleed out for five minutes while backup arrived only to find a cellphone not a gun, the cops should be held accountable with leave without pay while this goes to court.

Very Tragic incident, did the cops apprehend the car jacked/ house burglar? Nothing was stated about an arrest of an actual suspect.

Back to your cartoon, how do you make the leap that the officers were KKK or white supremacists? Do you have an article to support that claim?

Muhammad Rasheed - [ARTICLE] This Is Not an Ideal Time to Have White Supremacists Infiltrating Law Enforcement -- And yet, they are.

Alan Groening - That's not loading, I'll try it on the MAC instead

Alan Groening - The white guy with the glasses in the red shirt with what looks like in-n-out palm trees on it, he's wearing a MAGA hat, now I'm not sure if you realize this or not but out here in California went to Hillary Clinton in the 2016 election ....we don't like Trump here AT ALL. Unless it's supposed to be a parody of the evangelicals?

Muhammad Rasheed - There's LOTS of pro-Trump people out in California. They're the ones trying to get support so CA can secede from the greater USA.

Donovan Penaluna - Should say "I did'nt do nuffin"