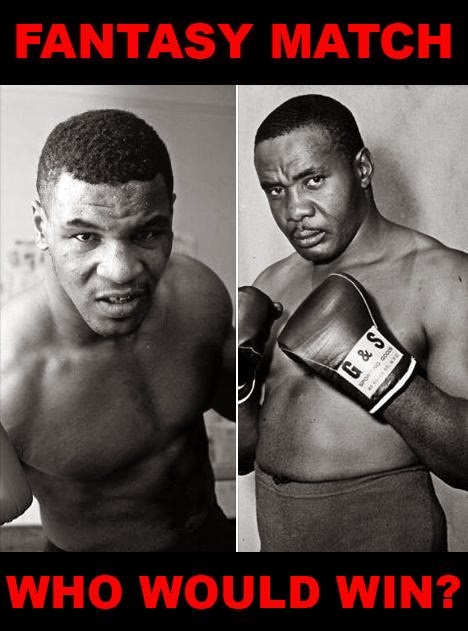 Muhammad Rasheed - Between Iron Mike Tyson and Sonny Liston, both men came from criminal backgrounds, and both of them used a bullying intimidation factor to great effect on many opponents; fight fans are well aware of how effective it is when you are able to get into your opponent's head like that. Notice that both fighters lost to men (Douglas and Ali) who were not intimidated by them and were able to stick to their game plans.

Using that same bullying/intimidation technique against each other, Liston would clearly be the alpha-dog with the advantage. Even at the peak of his powers, Tyson only used the same techniques as Floyd Patterson -- who was also known for his speed -- and Liston smashed him with ease. I find it difficult to believe he would have any kind of problem with Mike Tyson. In order for Tyson to pull that off it would really have to be one of those those great boxing flukes that make the sport so exciting.

Brett Barton - This depends on the Tyson.

Right training, right frame if mind. I think it would be a lot more difficult for Liston than you think.

Also, nobody in the world could have beat Buster that day, and it was a slacking Tyson at the time.

Didn't Buster just lose his mom or something and promise her he would win?

Muhammad Rasheed - Yes, that was a big factor in why he wasn't intimidated by Tyson, and put on the best performance of his career.

Muhammad Rasheed - And I really don't think it would've been difficult for Liston.

Brett Barton - I'll never underestimate Tyson. He is one of my all time favorites to watch. The speed, power, technique.

Muhammad Rasheed - I'm a Tyson fan, but he was an intimating force to a different generation. That stuff wouldn't have worked on a guy like Liston, who lived a level of "hard knock life" Mike couldn't have even imagined. And the speed, power, technique he displayed was previously duplicated in his former-champion, training camp older sibling, who ran into Liston like the immovable object of legend. I can't see how Tyson would've fared any better.

No doubt on Liston being a tough sob though

Psy Kyomynde Yobutishyne - Tyson punched a dude in the chest so hard I saw his fistprint in the dude's back. He punched Berbick so hard that he fell down three times from one punch. I could never count him out...even against Liston.

Zodicus Zu'ul - These days Mike Tyson has turned his life around. Running his own detective agency with his daughter. And the ghost of the Marquise of Queensbury. And a talking pigeon.

Gerald D Boney - Mike had a video game therefore he would win.

Abayomi Allen - Have to go with young Mike Tyson. He had a great team and was unstoppable

Muhammad Rasheed - Psy Kyomynde Yobutishyne Tyson wrote: "punched a dude in the chest so hard I saw his fistprint in the dude's back. He punched Berbick so hard that he fell down three times from one punch. I could never count him out...even against Liston."

Both Tyson and Patterson had phenomenal stopping power, were famous for being quick-handed heavyweights, and when they were at their best, they had the same trainer. lol

Muhammad Rasheed - Abayomi Allen wrote: "Have to go with young Mike Tyson. He had a great team and was unstoppable"

Everybody's unstoppable until they get stopped. lol I hope Floyd retires (and stays retired) undefeated.

Zodicus Zu'ul - Dude, it's the funniest thing I've seen since at least 2013

Muhammad Ali versus Floyd Mayweather, Jr.
Posted by M. Rasheed at 3:33 AM