The Uncomfortable Price of Freedom 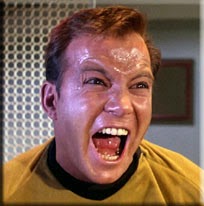 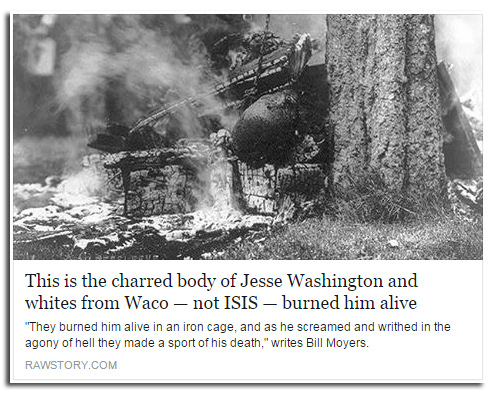 Brian Steward - Maybe instead of "Whites" we go with "assholes", "scumbags" or even "monsters" . Not a fan of the whole "whites" "blacks" thing.... They refer to ISIS as a group name not "browns". I get the point but think this race stuff can flow two ways sometimes...

Andre Owens - As a 'white" you have the privilege to be "Not a fan" however, the rest of us live daily with "this race stuff." And I dont know what you mean by "can flow two ways"? Are you trying to say that after 300 years of slavery, 100 years of segregation and Jim Crow, somehow talking about the true American history of past atrocities committed by whites should somehow be overlooked. Do you tell Jews that this Nazi thing can flow two ways?And I dont know where you've been but they refer to Isis as ISLAMIC all the time, and we know what that is shorthand for.

Brian Steward - In THIS particular headline statement from years ago, WE ALL know sorry, disgusting people did this. NO discussion. I just don't understand why at least SOMETIMES we (black or white) could manage to not be lumped together. I will NEVER say i understand how it feels to be anyone but me. I don't I couldn't. BUT I DO think at some point people might want to get onboard with the idea that NOT EVERY white person feels entitled and not every black person is a criminal. Not every white person is a Republican and not every black person supports Obama. Again, I'm only able to know how I feel but, if we don't TRY to look beyond color we will stay where we are. I knew if I commented it would draw ire but i'm tired of being lumped in as "privileged white asshole" for simply existing. You were never a slave, I was never a slaver. Yet, somehow there is still a stigma & a wall this many generations removed that so many struggle with. I guess i really don't know the answer. Maybe humans are just stupid. All of us. I mean, we don't even have enough sense to leave the supercollider alone do we?

Brian Steward - I guess what I mean is, there are good and very, very terrible people of every color, nationality and sex. But, so many otherwise good people still seem to need to define so many boarders and those boarders, whether it be sex, religion, race, politics or whatever will never all fit on the same map. I guess if we were all smart enough to fix it we would have by now. I mean, some slaves were sold by their own people. The Nazi's killed EVERYTHING that wasn't them, native Americans killed Native Americans. White people owned slaves and invaded the Native American lands.... It seems like we are all just wired as a species to not find balance. I think there are bright shining stars in every time in ever colored body in every nation but they are lost in a sea of stupidity and selfishness. I'm amazed we have gotten this far out of caves and into the light as a species and not just eaten each other as fundamentally dumb as we all are.

Trey Noë - @Andre… I think you are raising an important point and it is important to remember that the horrors we see today are in the context of a history filled with horrors. Is it fair to suggest that while it is important to recognize that not all white people participated in the atrocities just like all Muslims are not participating in the scenes we see in the middle East, it is also fair to suggest that both all whites and Muslims are complicit if they do not specifically decry and disavow these acts as not representative of their race and creed?

Andre Owens - One cant simultaneously celebrate one's heritage (like Monument Ave. in Richmond) and at the same time tell others to "get over" the past. But I hear that sentiment all the time from folks, especially those in the south.

Brian Steward - I'm not celebrating anything if that's what you are getting at. If so, I was obviously not clear.

Muhammad Rasheed - A lot of talking heads are mad at the president for pointing out that ISIS doesn't represent Islam, no more than the Crusaders, the Inquisitioners, nor the KKK represented Christianity. The critics are trying to say that ISIS does represent all of Islam, and that no Christian has ever done anything as horrific.

Andre's post illustrates the president's point. White Christians did this, just as "Brown Muslims" did that other thing. Those who decide not to get defensive hopefully are able to see the actual point and add to their folio of wisdom.

Trey Noë - ^^ Muhammad has it almost perfectly right but I might add one point of analysis. There is room for the uninformed to strike out at what they see as a hypocritical stance. If they have only consumed the soundbites, they might see a president who was happy to mention Christian atrocities but demurs from calling ISIS a Muslim Extremist Terrorist organization. (Understand, not my opinion and I cite this as an explanation not an excuse and I believe there is a difference)

Muhammad Rasheed - I would counter with the fact that being the reason why he's comparing them to the radical Christians groups named... they are all extremist terrorist organizations, with individual members claiming to subscribe to these different faiths, yet their actions as members of the organizations do not reflect the tenets of those faiths of the members.

He's mentioning the one precisely because they reflect the other. Why does he have to call them anything when he's pointing out the actions reveal them all to be the same?

Brian Steward - ANY organized group of people who kill innocent people who look or think differently are a Extremist Terrorist organization and need to be erradicated. They have no place in society.

Brian Steward - We will never move forward as a species with so much hate and violence. The problem with that is HOW ELSE do you deal with violent people except with violence. It's never an easy win.

Muhammad Rasheed - As a species, we're as successful as we've ever been, and our hate/violence levels are consistent throughout our history.

Brian Steward - Probably true. We are consistent. i'm still surprised we have gotten this far. I'll be the nerd and say I'd still like to see that "Star Trek" level of human society evolution.

Muhammad Rasheed - I wonder what that would look like realistically? It seems like it would have to be a loss of personal freedoms, in some kind of scientistic dictatorship, in which we would all be forced to conform to some arbitrarily chosen standard by elitists.

Brian Steward - Being a poor artist, I'll never know what being elitist feels like. I don't even go to Starbucks...LOL

Muhammad Rasheed - If our population has grown to a 7 billion by being our normal, consistent, hate and violence prone selves, what would it look like under the star trek system?

Obviously some form of eugenics concept would need to be in place, for one...

Muhammad Rasheed - I would rather be free.

Muhammad Rasheed - Human violence is just one of the Natural Disasters of planet earth that touch our lives regularly. Efforts to control nature will only cause more problems. Dying free is superior to dying in a state sponsored eugenics quota lab.

Muhammad Rasheed - To me.

Brian Steward - You are probably right....We all see how Kahn turned out. He did have some ripped ass abs tho....