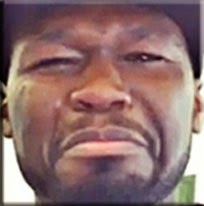 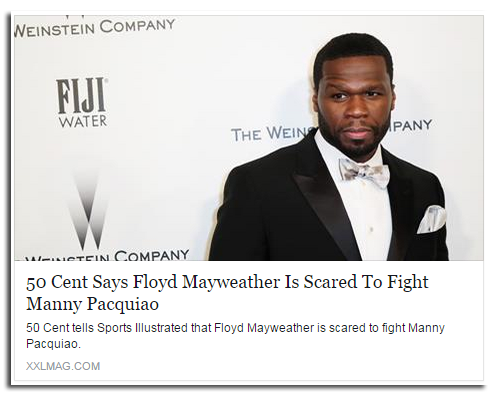 Angelique Perrin - Tell us something we don't know.

Jerry Lee Brice - LOl!...somebody please fight somebody?!?!LOl...this is getting to be ridiculous.It's about 5 years late already...

Anthony Estrada - Ann. They are both gonna be 90 and everyone who would've cared will be dead

Muhammad Rasheed - It's pretty clear that something happened between them that resulted in 50 Cent getting kicked out of the entourage and now he's bitter and saying stuff to hurt Mayweather. He probably got mad about something, thought he could take the little dude in his embarrassed anger, and got beat up in front of a bunch of strippers and then got clowned.

I can't take anything he says seriously regarding the Mayweather camp.

Jerry Lee Brice - I do..he's closer to Floyd than you or I have ever been, love him or hate him, he's closer to the situation than we are, so i think it's great he's letting us in on what is really driving the delay behind this fight.

Muhammad Rasheed - There's a reason he's not in that camp anymore, and he's obviously salty about it. A biased opinion composed of nothing but messy tear downs of a former friend are like listening to someone's bitter, salty ex-wife about them.

Jerry Lee Brice - ..since you nor i have never met 50 or Floyd, it's an assumption that he is salty...that's not a fact.

Jerry Lee Brice - ...all that is is one possibility.The other possibility is that he could care less, and is just reporting the facts as he knows them.

Jerry Lee Brice - ..they had just made up publicly over the death of Hayes the rapper...so they are not even mad at each other anymore...

Muhammad Rasheed - "That nigga just scared!" sounds like they made up to you? It sounds like a weak truce that lasted just long enough for the wake/funeral or whatever.

Jerry Lee Brice - That's how a lot men talk frankly about other men they are associated with...ask ANY of my homeboys that spent any time with me, i hate a scared grown man, and have no chill in expressing that to any man around me in real life...in worse language than 50...

Muhammad Rasheed - Floyd isn't scared. You just jumped on that because you don't like him. I understand that. You're a sport guy, and you're rooting for Team Pac-man. And that's cool. I'm rooting for Mayweather to win which I don't see how he won't. It'll be just another payday. 50 Cent is saying these things just to get under his former friend's skin because he's still mad about whatever that altercation was.

Jerry Lee Brice - ...and you know all of that as a fact because you read it on the internet?!?!LOL...50 Cent knows this brother, we don't.I will take the word of a man that actually knows the person he is dissing over the stanism's of his stans...Don't blame the messenger 50 just because it makes your dude look scared...maybe try to post a comment on Floyd's wall to build up his backbone so he is a lot less nervous about making this fight..who knows, Floyd may see it?...or post to his Instagram account.50 Cent probably got dudes number, and forwards all these comments to Floyd's phone...WE are just outside observers looking in.

Muhammad Rasheed - lol Jerry, you're just taking 50 Cent's word because you don't like Floyd and you want to believe him.

Jerry Lee Brice - That's a two way street, you already expressed that dynamic...so that goes without saying.Now...50 Cent is Floyd's associate, all in his inner circle, and knows what makes dude tick...at this point, he's closer to the situation than any of Floyd's fans... 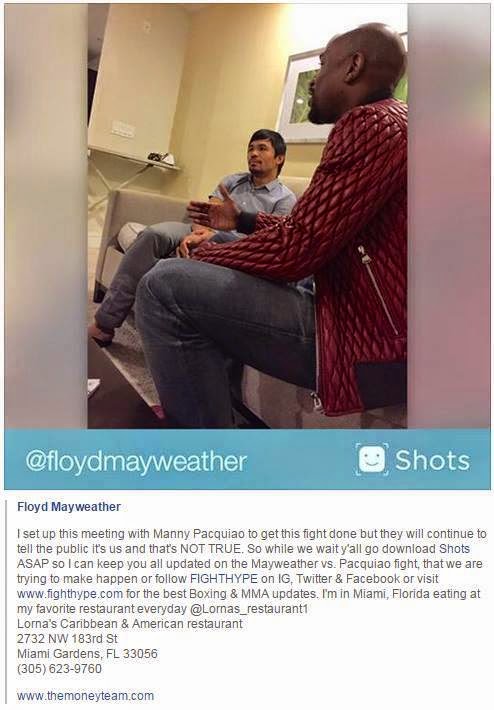 Muhammad Rasheed - He's also a bitter hater. That's what happens when you used to be a friend, and now you are outside looking in.

Muhammad Rasheed - I think "knows what makes dude tick" is an assumption. I don't think salty ass 50 knew him any better than Bieber does. Floyd is a guarded personality.

Jerry Lee Brice - btw, 50 Cent is a fight promoter, and manages several fighters,..with him it's business.For the stans/fans, it's gossip and dickriding...

Arman Sustal - There is no assumption in the fact that Floyd doesn't want to fight Pacquiao. Floyd says Manny's pay per view numbers aren't there, yet Floyd flights Maidana...twice. You tellin' me that fight outdraws Pac v. Mayweather? Don't think Mayweather is afraid of Pac more than he is afraid of losing. He truly believes his legacy will be his undefeated record when in fact his legacy will be he never fought the best (arguably).

I like my delusions better than your delusions, Jerry. Yours are more of the "Rah! Rah! Go, Team! Go!" variety, and have a horse-blinders-like bias. It's cool though, I'm not knocking it. It's sports fan stuff. But it doesn't mean anything at all.

Muhammad Rasheed - Arman Sustal wrote: "There is no assumption in the fact that Floyd doesn't want to fight Pacquiao."

Okay, then let's use the word "lie" then. Better?

Arman Sustal - Words are just that. Actions, however, reveal truth. Truth is Floyd doesn't want the fight despite the fact it'll be the richest purse in history. Doesn't matter what 50 cent says. Doesn't even matter what Floyd says. It's what he does that matters. And what he's doing is ducking in this fight. No other spin.

Muhammad Rasheed - Arman Sustal wrote: "Words are just that. Actions, however, reveal truth. Truth is Floyd doesn't want the fight despite the fact..."

And you keep repeating that lie. Curious.

At the moment, HBO and Showtime are still going back-n-forth over who gets what part of their pie. Everyone is moving forward on this to make it happen on the 2 May date that Floyd set. See you on fight night, Arman.

Muhammad Rasheed - No doubt. All I care about at the moment is watching Floyd beat the breaks off that kid in front of all his screaming countrymen + Jerry, so I can post this Bee Gee's song and strut around like John Travolta.

Muhammad Rasheed - It Will Be GLORIOUS!