What happens if you leave Islam? 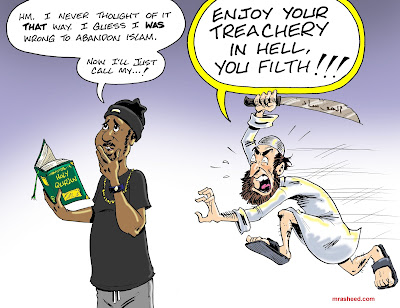 Muhammad Rasheed - The Qur'an says that "there is no compulsion in religion," so anyone claiming that Allah orders other Muslims to kill the leaver is out of line. We are not allowed to punish people who decide that Islam isn't for them, and Muslim theocratic governments who make laws that have such punishments within them are not doing so from an Islamic position at all.

What Allah DOES say however is that HIS punishment for such a decision will be hellfire. In the Qur'an, the One God of Abraham says that He will not accept any other religion from one who once accepted the truth of Al-Islam, and then rejected it. Such a deed makes one a "transgressor of faith," and Allah uses language that makes it clear He considers the transgressor to be the most vile of all the hellbound. Yet Allah gives even these foolish people respite, and says several times that if they repent and turn back to Al-Islam, He will indeed forgive them. So how could that situation happen, and the unwise have the opportunity to save themselves per Allah's merciful policy, if the very wrong and misguided Muslims attack and kill the person because they decided to convert to something else? It is obvious that this is why Allah said "there is no compulsion in religion," because it is He who knows and you who know not.

O ye who believe! Stay your hand, and sheathe your swords! Attack not the transgressor of faith lest he should attack you. It may be that it is Allah's will that the transgressor will soften his heart and turn back to the Truth. The future lies in the unseen, and Allah has not shared the secrets of the unseen with you! Will you not then be wise? Peace.
Posted by M. Rasheed at 10:42 PM