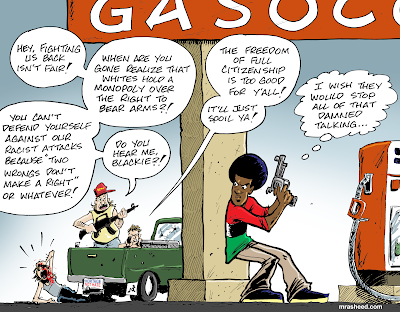 Andre Ruiz Guerra - yo have some repressed issues man

Alan Groening - Yeah he does. He’s relentless no doubt about it, but yeah he does.

Muhammad Rasheed - Or are you content to just watch me in my repressed issues misery?

Johann van der Watt - Just a thought. Cartoonists should be rigid and direct regarding life and underline and portray issues of society. There is however a fine line between brilliantly creating a cartoon that echo's universally across societies and cultures and cartoons that drum up emotions from a specific viewpoint. Portraying any issue such as racism in a cartoon and perhaps also crossing the line in the cartoon is something that cartoonists should be very careful to avoid.

Muhammad Rasheed - Hi, Johann. Thanks for your message.

My art is designed to be from a specific viewpoint, one that I think is underrepresented even though it is so badly needed. I'm a firm believer in the concept "When the oppressed don't have a voice, the bad guys win." My job as an artist is to be the voice for the oppressed.

It seems like you've designed your own art to reflect a broader, more generic message that seeks to appeal to as wide an audience as possible from your 'older white male in South Africa' perspective. I wish you luck in achieving your goals.

Nicole Haggarty-Martinez - Are people really telling someone how to express themselves through their own art? We all don't have the same experiences living in the US. Best rule of thumb is if it don't apply let it fly.

Muhammad Rasheed - (when people respond that way, I always assume I'm on the right track, to be honest)

Muhammad Rasheed - "Hey! That's not how we do things here! Conform to the norm!"

Johann van der Watt - @Muhammad... I respect your great art talent and your right to be a voice for oppressed souls. It is however very unfortunate that you had to wrongly personally label me, my thoughts, perspective, vision, age, gender and ethnicity. My comments simply underlined the possibility that any artist anywhere could fall into the trap of crossing the line by how their chosen topic portraid others. Regards.

Muhammad Rasheed - Hi, Johann. When I said that you were an 'older white male,' it was based on your profile pic. If that isn't you, and it turns out you are a young Black woman, then I apologize for assuming you were presenting yourself in the photo.

When I said you were from South Africa, it wasn't to wrongly put out false info about you, but it was only because under your profile's "About You" tab I found this:

When I said it seemed that your own art was designed to reflect a universal, generic position designed to be appealing to as many people as possible, it was only because you expressed that it was a "fine line" to walk between that kind of work versus a more focused, specialized art expression, and then you warned me against the latter. Naturally I assumed you were of the high integrity "practice what you preach" sort, and was only advising me from the path of experience.

I apologize for being so very wrong on all points, and will work harder to profile you more accurately in the future. Thank you for your time.

Andre Ruiz Guerra - Bruh. I do my part by beeing cordial with peolple of any race

Andre Ruiz Guerra - @Muhammad... im just saying that you are sticking.to the same topic and that is not healthy

Muhammad Rasheed - lol What are you basing that on?

Andre Ruiz Guerra - @Muhammad... every piece of yours i have seen is from.the same theme

That's more than just one theme, though my favs have some crossover.

Muhammad Rasheed - Oh, good! I will continue! Thanks.

Andre, I'm almost 50 yrs old, and have been drawing my whole life. Why do you think I haven't experimented? Hm?

I mean, it's almost as if this is some passive aggressive attempt to get me to stop making cartoons that you subjectively don't approve of or something. But naturally THAT'S not it though, amirite? Course not. That would be weird.

On the orher hand.

You are accusing me of trying to censor you.

Bro. Even if i wanted to make you stop you woukd keep it up

Just giving my piece of mind

Andre Owens - @Andre Ruiz Guerra... Then why comment if you're not trying to control the content of his art?

Kwesi Ako Kennedy - You're supposed to shoot while he's talking!

Cynthia Sonier - Actually, this is spot on.

Jeff Margeson - Though I don't necessarily agree with the message, the artwork is well done. I respect your opinion, Mr. Rasheed. Keep rocking on!

Thomas Ferranti - @Andre...Giving someone a piece of your mind doesn't mean what you think it means. Perhaps you mean you were simply sharing an opinion, sharing your thoughts. That's fine. That's "speaking your mind".

But to say that you "gave someone a piece of your mind", that means that you were very angry at them and didn't hold back anything that you wanted to say.

And, although it sounds the same, having "peace of mind" is very different and means you are happy that everything has gone well for you.

And good for you for learning a second language. I only know 1.

Alan Groening - @Thomas... personally I agree with you and Andre Ruiz Guerra, but arguing with Rash is like engaging in a hopeless duel of words... any comment... positive or negative, is met with the harshest of comments from him like "trying to control and/or censor my artwork" and other "attack" comments. Even innocent comments such as "feel free to continue" is met with repeated snarky comments "oh good, I will continue" and "I mean, it's almost as if this is some passive aggressive attempt to get me to stop making cartoons that you subjectively don't approve of or something. " from Rash.

Not only can you not engage in an argument with Rash, you cant have any reasonable sensible conversation with him either, especially if you're white, because you're automatically branded a white Supremacist and a racist.

My two cents is to just stop attempting to communicate with him, it really isnt worth it.

Muhammad Rasheed - Hey, Alan... remember that time when you told me to stop illustrating my essays because you didn't think I should, and when I pointed out that I majored in Illustration in college you responded with "Fuck you then"?

Muhammad Rasheed - Just stop looking at my cartoons and trying to engage with me if you can't take it.

Alan Groening  - @Muhammad… You’re rude to other cartoonist Cafe members to the point of being obnoxious...

Nobody can engage with you, you’ve made that abundantly clear. It isn’t about us taking it it’s you that can’t take it.

(and I’ve been busy reading those Amazon reviews of your books there.... or lack of reviews.)

Thomas Ferranti  - @Alan... There is a feature I use almost daily called BLOCK. If you don't want to see or read anything from someone just block them. It's E-Z.

Muhammad Rasheed - Alan wrote: “you’re rude to other cartoonist Cafe members to the point of being obnoxious...”

1.) I post a cartoon.
2.) Someone like you suggests that I change something about the cartoon based on their world view.
3.) I acknowledge the comment, but decline to make the change based on my own world view.
4.) You get upset and start calling me names.
5.) Amused, I defend my work and my world view.
6.) You continue to call me names and interpret my responses as “rude” and “obnoxious.”

Alan wrote: “Nobody can engage with you, you’ve made that abundantly clear.”

Lots of folk engage with me. Some find themselves butthurt on the other end of the exchange because they believe they can exert some undue level of influence over me. I consider those encounters Teaching Moments™.

Alan wrote: “It isn’t about us taking it it’s you that can’t take it.”

I’ll interpret that as meaning you simply want me to believe what you want me to believe and when I refuse, you consider it “not taking it.” I don’t want your ideologies and belief systems, Alan. Peddle them to those who are actually receptive to them. Let the record show that I am not of that group. I am free.

Alan wrote: “and I’ve been busy reading those Amazon reviews of your books there.... or lack of reviews.”

That unfortunate and sad comment has the unmistakable stench of envy upon it. Are you really poking fun at me because my works aren’t famous yet? I would let that toxin go if I were you as it will not serve you. When my works do become famous, should it be God’s Will, you will be the first one shaking in rage, and likely to give your silly self a stroke. Calm down. I suggest you take Thomas’ advice and just block me since you can’t seem to control yourself.
Posted by M. Rasheed at 10:44 PM