Schemes of the Top Russian Agent 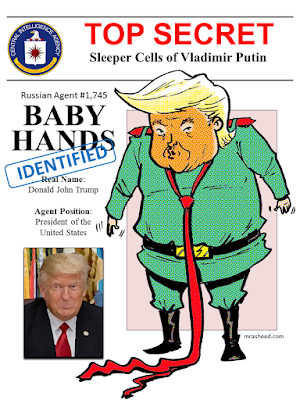 Muhammad Rasheed - Stop calling Russian Agent Baby Hands stupid all the time when it's clear he only plays the fool for the camera. His sole aim from the beginning is to exploit the White House seat so that he and his cronies will be trillionaires when he finally leaves office.

When your plans are WORKING, then how does that make you stupid? Do you think he REALLY gives a shit about those empty political talking points? Obama's the only POTUS who ever actually cared about his campaign promises, using them as an agenda checklist for how he governed. Trumpamania was just running his mouth while playing his true game of "wealth-grab." If he can get one or even two of the most high-profile campaign promises done just to mess up Obama's legacy it will boost his ego, but he really doesn't care about that stuff because he doesn't have to. It was never the point of why his handlers pushed him to become the president.

Emmanuel Marquez - Would you vote for Donald Trump again, after all we know about him now?

Muhammad Rasheed - I didn’t vote for him the last time, and it turns out, neither did most of the eligible voters. The reason why we have Vladimir Putin’s number one asset in our White House today is because the GOP suppressed millions of Black & Latinx Democratic Party ballots, literally cheating Trump into office.

Fortunately former president Obama and former Attorney General Holder are leading the efforts to control the GOP’s diabolical and unpatriotic sabotage of our democratic traditions, and hopefully it’ll be enough to keep Trump from doing it again.
Posted by M. Rasheed at 3:13 PM