Should We Give McGregor "Credit" for His Reckless Greed? 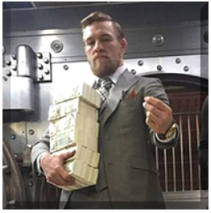 Muhammad Rasheed - You want me to give Conor McGregor "credit" for agreeing to become a multi-millionaire? Because that's all that happened here. Remember when people would ask if you'd fight Iron Mike Tyson for a million dollars? Of COURSE you would do it, while praying you didn't die. That's all this fight represented.

Conor proved he was willing to risk his health for mega-wealth, in a high-stakes episode of "Jackass." That's all.﻿ Since he was already a professional prize fighter anyway, this risk was less brave for him than it would've been for you as a non-pro fighter, but the basic principle was still the same when you pit a 0-0 novice boxer against the 49-0 future hall-of-fame, long-time pound-for-pound, boxing prodigy, multi-world champion. I'm not giving Conor "credit" to be a reckless daredevil for big money when we ALL would've jumped at the chance to make $100 million in less than an hour. That's why Quora is all of a sudden full of "How can I challenge Floyd, too???" questions. lol

See Also: The Mayweather versus McGregor Fight
Posted by M. Rasheed at 8:56 AM