The Hard Sell: Developing a Committed Workforce Through Indoctrination 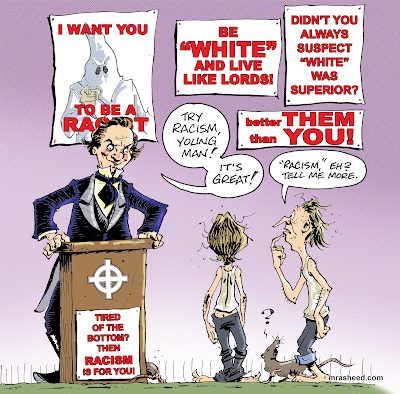 I disagree with Oates' over-generous and naïve sentiment. The reason why racism happens is because it is profitable. Make it unprofitable using a zero tolerance boycott that destroys a company's brand and racism will stop cold. I guarantee it. You think the billionaire owners won't desperately figure out how to save their wealth if they know a nation-wide Black Boycott is in place and 100% serious? Try it.

Stephen Wilkinson - no racism is a non-profit

you are also looking at racism incorrectly, if i may dare correct an expert.

Muhammad Rasheed - "Racism" is a money-making system designed to uphold the collective Euro-ethnic groups in an artificial racist aristocracy at the expense of Black people. The emotion-based, individual-level bigotry aspect that has falsely come to define racism was only ever the marketing/propaganda campaign used to indoctrinate the poor and middle class whites to justify in their minds why it's okay to abuse Blacks in this way.

If you only address the marketing 'bigotry' piece of racism without ever addressing the root cause economic core of it, then racism will continue and you will be forced to invent false narratives to explain the racial wealth gap and mass incarceration, etc., which will of course force you to return to believing the false marketing campaign that sold the poorer class whites on maintaining systemic racism in the first place.

The 1% class needs you to buy-in to the fallacy that the surface film bigotry aspect IS racism in its entirety. Therefore if they "train" their workers in an 8 hr (+ lunch breaks + get out early) seminar to stop being emotion-based bigots, and release the training sign-in sheets or whatever to the public, it will give the illusion that the corporation is now purged of racism, while the racial wealth gap continues to widen and the managerial/overseer-level racists pretend it's because of "culture" and "deficiencies in IQ."

Muhammad Rasheed - Your observance that racism is "multifaceted, nuanced and multifaceted in its expression" is just the various ways the poorer class whites manage the system. The core of racism is still all about siphoning wealth out of the Black community to hand to white people.

Muhammad Rasheed - It's true. In those days, you white conservatives favored the Democrat Party.

Joe Engesser - Neither of us lived in those days, but I do know our conservative President favors success and safety for ALL Americans.

Muhammad Rasheed - 1.) Your first post was full of confidence regarding your knowledge of what was going on in those days, but suddenly you're expressing doubt on both of our behalf? lol

2.) You are misled since that opinion does not reflect the facts of Trump's public record.
Posted by M. Rasheed at 1:12 AM