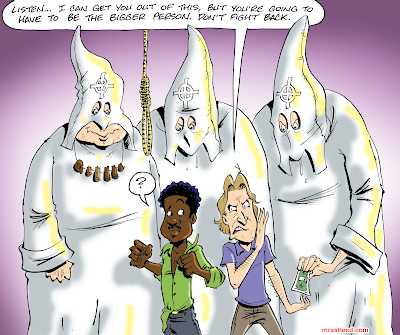 Mike Wilson - Fuck that. Time to stand up.

Cynthia Sonier - Something has to be done. Fast. But not everyone who does not agree with every. Single. Word. You. Say. is paid by the bad guys.

Matt Ravencroft - Well said. Although I'm not entirely sure what can be done about racism, I don't feel generalizations help anybody.

Cynthia Sonier - That being said, I might not agree with everything the cartoon says, but I still agree with most of it.

I don't want to be another jerk to whitesplain race to black people but the cartoon conveys one of the most toxic ideas we have about evil, from school bullies to concentration camps to child abusers: we believe that all evil must have been planned, intentional and the work of people who willingly do evil just because they are evil. Social psychology like the works of Milgram, Zimbardo and Arendt prove otherwise: evil is sneaky, banal, ordinary. It is not the work of cartoon villains but of ordinary people, like all of us, who do small amounts of evil and brush it off as "no big deal" to go along with the crowd or get validation from people we look up to...or are just too lazy or scared to try to do anything positive. I've done that mistake quite a few times.

That white guy does exist. We're all him but don't give him the grandeur of being paid, that kind of machavellianism and evil is above most people. He's at most a coward and we're all coward sometimes.

It is in no way an excuse, or a downplaying of the consequences of that cowardice because add one coward too stupid to put himself in someone else's shoes instead of just going along with the most rabid dog, then another, then another and that is how genocides happen.

Thank you so much. That describes that phenomenon perfectly.

Cynthia Sonier - Well let me whitesplain again that if any form of evil in evil in the World was the stuff of conscious, loud, obvious cartoon villains we would have stopped it some time in the 10 000 years since we came out of the caves. If we really want to stop it, we have to dissect our own minds like the corpses of an epidemic victim to learn what's wrong.

Muhammad Rasheed - "Whitesplaining" isn't going to be an efficient way to sway someone to your argument when it is only backed by your uninformed opinion of the subject. In reality, there really are truly evil people deliberately conspiring to keep Black people in a subjugated state ripe for exploitation and plunder, and it's been that way for half a millennium across the globe. The documented historical record reveals these 'cartoon villains' are the who's who of well known Western historical figures up into the present day.

Kimberly Moseberry - You should draw the black dude saying. "Nah I got back up." Then saw three big black dudes behind them looking pissed.

Muhammad Rasheed - But it would change the meaning of my message. lol

You make the sequel.

Muhammad Rasheed - Do it. I'll do the next panel.

Ben Jones - Great expressions and gesture. All people really have to do to erase racism is to realize we are all the same race and start treating each other that way. Unfortunately ignorant, hateful souls of all races continue to train their children in racism sometimes deliberately, but often through ignorance. Fighting racism with messages like this is similar to trying to put out a fire with lighter fluid. It has to happen at home.

Muhammad Rasheed - If only that was all we had to do to eradicate racism. Unfortunately it isn't that easy since racism is more than emotion-based bad feelings about another. Racism is an economic system designed to plunder the wealth of Black people to feed into a racist aristocracy. The bigoted bad feelings aspect is just the marketing arm of the system.

In order to cure society of racism, it will require a dramatic change in the economy on a similar level as what the South experienced after the Civil War.
Posted by M. Rasheed at 10:17 PM