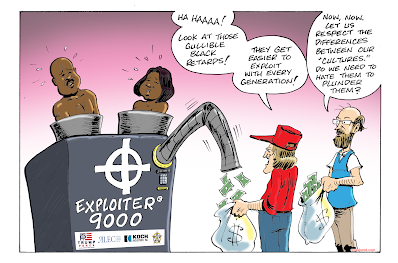 Ola Betiku - Now that Black Panther is a billion-dollar franchise the question is starting to go around on whether a non-black person should ever direct a sequel… Personally, I think that’s fine, however, Ryan Coogler went to Africa and studied many tribes and customs. He also incorporated his personal history to give it all an authentic feel. If a non-black person can do that than it should be fine. Too often though you see that folks lack a natural sense of a culture and end up offending people by accident. How many times has a company had to apologize for something they all missed, something anyone from the offended culture would have seen instantly. There is an advantage to growing up with the subject you’re trying to speak on. Look even at the Black Panther film, there is a scene with an older South Korean woman speaking. Many South Koreans have come out saying that they liked the film, but her performance was laughably unauthentic. I saw nothing wrong with it, because I don’t speak the language. But actual South Koreans could just tell that the woman wasn’t saying the words correctly. Then you have other cases when a person is trying so hard to be respectful that the film just comes off too bland or safe (The Princess and the Frog) or you get folks so willing to be “Pro Black” that everything comes off cartoonish (Tarantino) So, honestly yes, a non-black person can make a Black Panther film… They’d just better have a great story to tell and a vision that respects the overall message of the source material.

Gregory Day - Every race is exactly the same, so it wouldn't matter. A white person is just a black person with white skin.

Muhammad Rasheed - The concept of "race" as we know it in the West was invented to plunder the wealth of Blacks in order to create the enduring racist aristocracy that plagues society. Because of this, and the ideology-cultural baggage that hangs around it, it absolutely would matter if the director's race was changed.

Gregory Day - No, every race is exactly the same the myth that white people are better athletes and have bigger genitals is totally false.

Muhammad Rasheed - The pie-in-the-sky ideal of "every race is the same" will only be true once socio-economic equality is achieved, the infamous white/Black wealth gap is removed, and Blacks have attained economic inclusion into this society we've help build. Trying to paint the still anti-Black systemic racist society with an "It's all in your head!" flimsy paint coating without addressing the country's most problematic and enduring sin will just make the fundamental problem worse.

What good is "politically correct" if it fails to address the root cause?

Gregory Day - White people are not better athletes, it's a myth.

Ola Betiku - @Gregory Day... this isn't about race, it's about "culture" and being PC, at least in this case would not be saying that all cultures or races are the same... It's saying that they are all equal despite their differences...

James Bowman - Ethnicities and culture are different among human beings. Therefore these difference need to be respected.

Muhammad Rasheed - @James... Ethnic and cultural differences do need to be respected, but the primary and most critical barrier to that ideal is the fact that an artificial ideology has built up about 'race,' the sole purpose of which is to protect the anti-Black racist aristocracy ("Blacks are inherently criminal, lazy, etc., because of their ages old culture"). The ideology is designed to falsely justify why it's okay to plunder the wealth of Blacks to increase the wealth gap, so if society is never cured of its systemic racism and the ideology is allowed to remain, that means the idea of "respecting cultural/ethnic differences" concept will do nothing but continue the problem while pretending it is doing good.

This is the core of the left's "multicultural" scam. It's actually helping support anti-Black systemic racism from the other direction, within the guise of compassion.

Joe Engesser - I'd cover the others with a Planned Parenthood logo. President Trump's for the safety and success of all American citizens.

Muhammad Rasheed - Find who profits the most from that foetal tissue, and you will discover that the logos I've placed are sufficient.

Karen Elise Fuller - I just don't get it. I am trying..but it isn't happening. Planned Parenthood isn't the enemy..it's having babies without a partner..it takes a Mommy and a Daddy to raise a child.. together.

As far as who is killing black lives.. it's Black men with guns. And that fact came to me by way of a friend who has lost a lot of family members.

1.) A system set up to reap free foetal material out of the Black community to produce unlimited wealth for the people who routinely abuse, exploit and disenfranchise Black people is definitely the enemy. If Planned Parenthood can be found within that chain of social predators, then we may safely "call a duck a duck" without embarrassment.

2.) "Having babies without a partner" is a societal trait that increased dramatically starting with the Middle Class White Women-led woman's right's movement during the cultural revolution of the '60s-70s. Personally I consider the grouping of the nuclear family concept with the toxic patriarchal tradition to be tragic, but there is always tragedy during war. C'est la vie. We'll cope with that, but it is far worst dealing with the subjugating abuses of an oppressor figure accepted as a societal norm. Single parenthood isn't "the enemy," it's a side effect of warring with the enemy.

3.) Neither Zimmerman nor Darren Wilson were Black men, Karen.
Posted by M. Rasheed at 11:28 PM