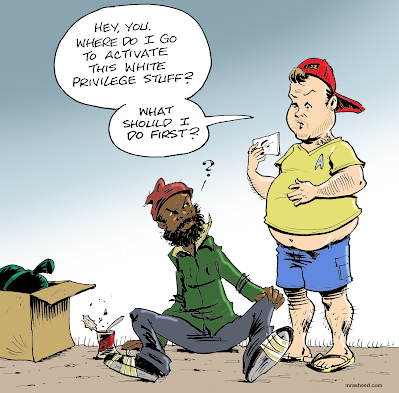 CITATION
Rasheed, Muhammad. "The Amazingly Colossal Lazy Entitlement of White Privilege." Cartoon. The Official Website of Cartoonist M. Rasheed 14 Apr 2018. Pen & ink w/Adobe Photoshop color.
Alt Fed Employee‏ - A white man who has a law degree and worked on the campaign of the president can have a meltdown of epic proportions on national TV, but republicans think we should drug test food stamp recipients. #Nunberg

Kyle Tomlinson‏ - Where do I cash me white privilege card in I need it bad. It just seems to not work for me maybe I need to act more white. Idk

Muhammad Rasheed‏ - There are numerous people in the country who've gone through certain institutions (like university, the military, etc.) who were just not clever enough to take advantage of all the opportunities that were available to them, effectively wasting the experiences.

Muhammad Rasheed‏ - You're asking a Black man to help you, a white man, figure out how to take advantage of your 'whiteness' card while in a society specifically designed to favor you over me.

That colossal level of lazy white entitlement is "Expert," I would think.

Muhammad Rasheed‏ - What 'excuse' did I use and for what action, Kyle?

Kyle Tomlinson‏ - I’m not going to sit here and say it doesn’t exist, First, no reasonable person can argue that white privilege applies to the great majority of whites, let alone to all whites. There are simply too many variables other than race that determine individual success in America

Muhammad Rasheed‏ - The European imperialism, that spread the white supremacist ideology all over the globe like a blight, does indeed apply to the "great majority" of white people. In fact, the term "white people" was created as the privileged access badge of exactly what you are denying.

Muhammad Rasheed‏ - The access to the path towards economic success is stronger for you than it is for me within a society specifically built to favor a white male over a Black male. It would serve you better to stop whining and go figure out how to get a better quality of life. You look foolish.

Kyle Tomlinson‏ - crying over BS na, “white privilege” is an actual thing, but for you to assume that it’s been easier for me because I’m white is childish. You don’t know me, where I been. Without even knowing me you see privileged just because of the color of my skin. #twowrongsdontmakearight

Muhammad Rasheed - 1) "Been easier" means nothing to me. It IS easier for you; you just failed to take advantage of the legacy of racism that benefits your specific demographic. Again, all whining from your direction looks foolish and amazingly lazy/entitled.

Muhammad Rasheed - ‏2) "Privileged for the color of skin" is the system your specific demographic created (at my expense!) to benefit YOU. lol Literally.

You sound crazier and crazier the more you type. Do YOU even know what your point is trying to be? hahaha

Kyle Tomlinson‏ - Excuses, times are changed stop feeding this bs into young black kids heads, before they grow up they already fail. People like you are holding the African American youth back. Say what you want, believe the lies from the lips of the same people that created white privilege

It's people like you who tell people like me to stop warning my people about the nature of white supremacy who we need to guard ourselves from. The LAST thing we need is to believe the diabolical lie that the devil doesn't really exist WHILE it's exploiting us. You may keep what you're selling, Kyle. I can't use it.

Kyle Tomlinson‏ - I hope you don’t have kids man growing up to hate white man, yeah you want to educate them about “what it’s like” but it does is create a bigger divide. Have fun yelling in the streets, and defending clearly guilty people, “stay woke” can’t fail if it’s not your fault.... right

Muhammad Rasheed - I don't hate white men. I hate white supremacy, and those who willingly support it. It was my understanding that "white people" and "white supremacy" were two different things, unless you've accidentally admitted to something you weren't supposed to reveal.

Muhammad Rasheed - While you're explaining that, I haven't yet figured out what you mean when you type "excuses." Are you just using that for filler or what? It doesn't make sense in context. Explain that too, please.

Muhammad Rasheed - lol White privilege would not exist without the white supremacist system. The one is the stinking, runny discharge of the latter.

Kyle Tomlinson‏ - This guy, whatever clearly you just see color with shades of factual stats surrounding it. Maybe some day you can get to know some one not based on the color of there skin. You can’t change the world by contributing I the hate.

Muhammad Rasheed - Well, since white supremacy is evil and is used to subjugate and exploit Black people to fuel white privilege, I'm pretty sure you're wrong and I AM supposed to hate it.

You're not very good at these kind of arguments, I noticed. Maybe you should stick to North-Western sports.

Kyle Tomlinson‏ - Hahahahahaha I will and you stick to wasting your time, I’d like to thank you for standing up for something though, most people just give up because they tell they’ve already been beatin. Keep up the good fight, whatever that is.

Kyle Tomlinson‏ - Excuses, you let something get in the way of your progress, and you brought that up about the white supremacy BS. you referred it to a byproduct of my way of life because of years of wrong doing on there part. You say you don’t hate the white man but negate the success of one

Muhammad Rasheed - Oh, okay. You're just projecting while pretending you're talking about racism from my perspective. I'm doing just fine actually; this is a systemic problem that affects the whole. Some individual Blacks (and families) have managed to escape poverty. #BootStrapsLOL

Your "excuses" filler doesn't apply to me individually, but it does to you with all your lazy whining.

On the other part, I can't tell whether you are trying to gaslight me, or you really are ignorant about the history of racism in the West. Have you ever looked it up before?

Kyle Tomlinson‏ - So your saying some people are better then others. I mean you did say some black families have managed to make it out of poverty. How they do that fam

Muhammad Rasheed - Wait... your first sentence implies that you believe that having more money makes someone inherently "better."

Better in what way exactly, Kyle?

Kyle Tomlinson‏ - My first sentence is summarizing what you said and you said economically it’s geared towards white people way from the start I’m just rephrasing what you said. And you didn’t answer my question what do you mean “some people made it out” POVERTY.

Muhammad Rasheed - To be clear, white supremacy is evil, so a society that is fundamentally built around it is an evil system. Black people who for whatever reason are able to benefit from aspects of that society that are normally withheld from them in favor of whites doesn't make them "better."

Also, the USA uses a form of capitalism as it's core economic system, so there are alternate ways for people to escape poverty here. There were numerous wealthy free Blacks during the height of slavery itself. So that's not a trait of "better," it just means you have more money. Racism is built into class in the West, creating a white supremacist racist aristocracy. Black people are prevented from pooling their resources and building a political-economic support base so they can achieve economic inclusion within the mainstream society. When they try to do so they are actively attacked and sabotaged by the intelligence agencies and lesser law enforcement in a system set up originally by J. Edgar Hoover.

Muhammad Rasheed - I'm basically giving you a glimpse/snapshot into the body of information about the history of racism that's available. I suggest you take the time to be informed before you go around lecturing people from your "just made it up" ideas.

Kyle Tomlinson‏ - When you fight prejudice with prejudice, not only you escalate the tension but also compound the problem, making it harder to solve. Ima just leave because your gonna hate even with all the reason in the world #notallwhitesarebad #mediasheep #MAGA

Muhammad Rasheed - I'm not prejudiced against white people, Kyle. I'm protesting white supremacy and the systemic racism built to plunder Blacks in order to maintain the racist aristocracy. Anyone who loves the ideals of the Republic and believe all people are equal should feel the same way.

If you really want me to believe that, and specifically about you, then why do you think a white man who is 100% uninformed on the topic of racism in the USA can lecture a black man who is informed about it?
Posted by M. Rasheed at 2:19 AM