The Fundamental Sin of Racism 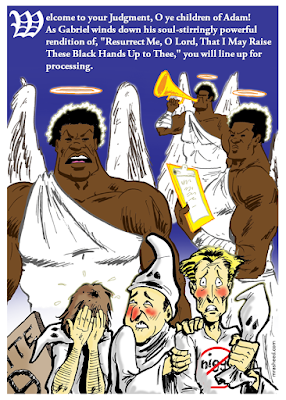 Q: "Are racists who believe in the God of Abraham saved by grace?"


Muhammad Rasheed - They will be saved only if the Day of Judgment finds that their righteous deeds outweigh their evil deeds, per the requirements of the One God of Abraham.

One of the requirements for passing the Final Judgment and winning through to paradise is one must "love the next life more than this life." That means, the believer must have faith that the next life is the eternal perfect realm that God promises, and long for it more than what your senses tell you to the knowing certainty of the material life you hold NOW. You do this by establishing regular charity, and setting aside a portion of the bounty God has provided for others less fortunate. In other words, the believer proves Belief in the Afterlife by not being attached to any of his or her possessions, and does not have a problem "letting go."

For the racist, this poses a dilemma. The systemic racism of Western Civilization is based upon the materialist's hoarding monopoly of wealth & power for the dominant rule of elites among the European ethnic groups under the banner of White Supremacy. The foundational philosophy and ethic of the West is the subjugation and exploitation of the poor and non-whites to uphold the White Supremacist Ideology that a handful of white legacy families benefit from in particular, and the majority whites benefit from as tickle-down residue. The refusal to let go of this "whitopian" system's racism, and for preventing the African-American from building wealth over generations by using terror and grifter confidence scams built into national policies, the racists at all class levels prove that they prefer the sinful man-made "heaven" on earth that benefits only them over the promise of God's heaven.

Whether the compounded force of this race-based selfishness sin will be enough to prevent those who willfully support systemic racism from entering paradise remains to be seen. Somehow they seem to think that being nice to all the cutest animals will be enough to cover over their many atrocities committed against their fellow humans so they can personally live the high-life, but this doesn’t seem very likely. Remembering the Christ's instructions to the rich young ruler, I would think they will be rebuked. The wealthy ruler admitted that he had kept the commandments "since he was a boy," so Jesus (peace be upon the messenger) told him he had to give up his wealth. In doing so he would both amass enough good deeds to outweigh his evil, and he would also prove that he held no attachment to the material realm that outweighed his love for God's promise. As you may recall, the rich young ruler refused to give up his wealth and preferred hellfire. The situation with the modern day racist is the same in their refusal to cease their subjugation/exploitation of the Black race, and their refusal to pay them Reparations for economic-based wrongs both old and new perpetually committed upon them in the last 500 years.

Using logic and reason in an analysis of the material, I cannot see how the committed racist would be saved at all, but of course only God knows best.
Posted by M. Rasheed at 12:10 PM