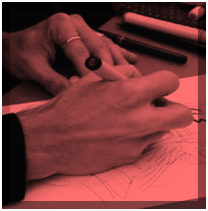 TBD Brandt - You know, once again the Eisners ignored my write-in category of Best Stuart Immonen. I'm beginning to think it's a fix.

Muhammad Rasheed - You want to boycott? Let's do it.

TBD Brandt - Seriously, it's criminal that man is not literally buried under a mountain of Eisners

Muhammad Rasheed - There are quite a few artists in that same generational-influence pool though. Very competitive.

TBD Brandt - That's absolutely true, but to have a career like his with no formal recognition is batshit.

Muhammad Rasheed - Unfortunately, that phenomenon is the norm rather than the exception. Hopefully Stu absolutely loves what he does regardless.

As prolific as he is, he probably just needs to get his "political social party schmoozing" game up.

(but of course that will make him less prolific, and thus, more prone to missed deadlines and/or depression.)

Muhammad Rasheed - I would be forced to blame the resulting tragic suicide on you, Brandt. #WhatHaveYouDone
Posted by M. Rasheed at 4:08 AM