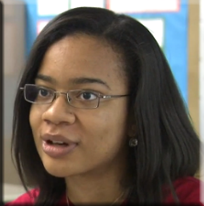 Arianna Alexander worked hard to graduate as a valedictorian with a 5.1 grade point average from . She additionally put a lot of effort into raking in over $3 million in scholarships. Now, she can go to college free from financial worries.

“I feel like it means I can afford college and I don’t have to worry about it. I feel like that’s an issue for a lot of people my age,” she said, according to WLS news.

Arianna, who is from Hyde Park in , has received acceptance letters from 26 universities, six of which are Ivy League schools.

“It was a lot to take in. I received emails, letters. It was just like, ‘Come here, come here!’ They were bombarding me with all this information,” Ariana explained.

She said that her family played a major role in encouraging her to set scholarship goals, especially her father, Pierre Alexander. After he learned that another student from Kenwood had won $1 million in scholarships, he knew that Ariana was able to do the same.

“I planted the seed in Arianna’s mind that you can do the same thing. So when the process got started and a million was achieved, let’s go for two. I said let’s go for three and she did it,” said. “My wife and I have always stressed to her, if you do your best, you will be the best. So we try to make sure she upholds to that.”

He added that Arianna’s three older siblings have already gone through college, so now he is relieved that his youngest will be able to continue her education without financial burdens.

Arianna says that she has never forgotten the inspirational words her father told her that has kept her going: “Work hard, pray on it, and don’t give up. No matter what happens, you did your best.”

“So as long as you work hard, I feel like there is always a way for you,” Arianna said.
Her career goal is to be an entrepreneur and own four restaurants, something that she is already working on, as she has been planning the menus. But first, she wants to learn about business.

One of her teachers, Paul Brush, talked her into going to the so she can enter the Wharton School of Business.

“As teachers, we have a big moment to play with the lives that we have in our classrooms,” Brush said.

Through all of Arianna’s success, her family has been supportive of her, and they assure that this will never change.

“We expect bigger and better things for her,” Arianna’s father said.

Muhammad Rasheed - This is what my real Black leaders act like.
Posted by M. Rasheed at 8:45 PM