Writing You Into His Tale 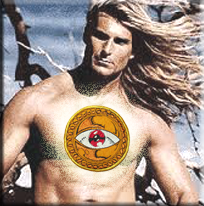 Muhammad Rasheed - Baron Mordo was the talented sorcerer that The Ancient One initially had Hope to groom to replace him as Sorcerer Supreme. But he quickly discovered that because of Mordo's secret schemes to take all of our guns, racially divide the country, socialize everything, and blame his problems on the previous Sorcerer Supremes, The Ancient One realized that Only One Man can save us all...

I understand the Black Nerd community's expressed desire for more iconic Black Villains in genre fiction, but depending on how it is done, it can do no more than add to that "Whites are the good guys of history" white supremacist indoctrination that is CONTINUOUSLY beaming down on us. In which case it becomes a classic case of "Be careful what you wish for..."

Stop asking that guy to do shit for you, please, and do it yourself. Support each other that you may prosper and counter his evil message. Please? Thank you.

Muhammad Rasheed - He probably was originally.

Muhammad Rasheed - This here is just a part of Hollywood's fake/shallow diversity program.

A real such effort would have been to support the Smith family's After Earth project, instead of condemning it before it even came out in theaters.
Posted by M. Rasheed at 6:55 AM