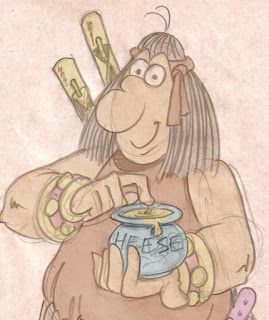 Character Background/Synopsis: Groo is an extra-stupid-with-cheese warrior barbarian who is SO stupid and destructive he's like a mini force of nature in the primitive, pre-historic world that Sergio has created.

What makes him/her cool: In addition to being rip-roaring fun and hilarious, Groo is as deadly in combat as he is stupid. He usually destroys entire armies all by himself with his two swords alone... that's how stupid he is.
Posted by M. Rasheed at 1:02 PM