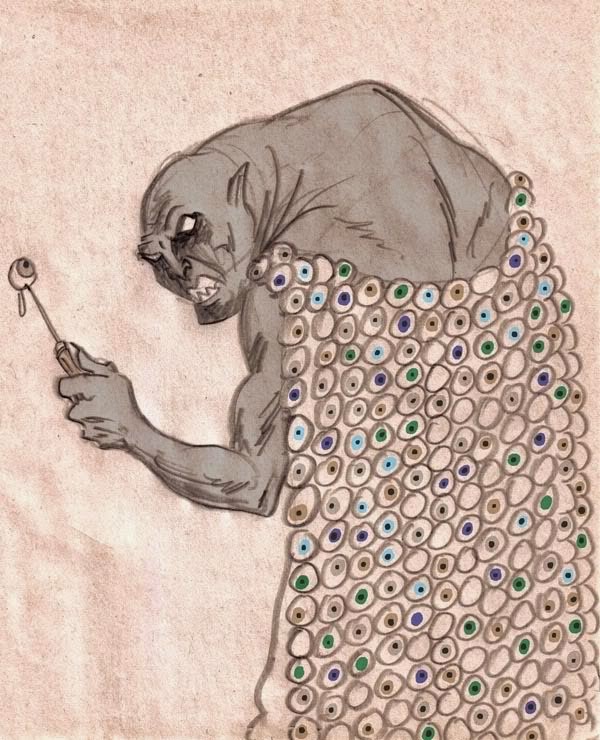 Character Background/Synopsis: When the mendicant rogue Lianne the Wayfarer discovered a beautiful witch, with golden eyes that matched his own, alone in a little cabin in a picturesque meadow, he immediately tried to take her to quench his lusts. With 20 flying blades of death that obeyed her every command, the witch wasn't having it, but she told him that if he retrieved the other half of a gorgeously-detailed golden tapestry from the villain Chun the Unavoidable, he could have her as he liked. Lianne immediately agreed and set forth on the quest. But Chun the Unavoidable was a horrible monster that slew all would-be champions and attached their eyeballs to his cloak. No one who had caught a glimpse of the beast had ever lived to give a description. Lianne would fair no better on his quest than anyone else, and that night, Chun appeared at the doorstep of the witch. He praised the quality of the latest pair of eyes she had sent his way, and gave her two golden threads for her tapestry instead of the usual one. Carefully sewing them into her half, she promised the beloved city the tapestry depicted that she would be home soon.

What makes him/her cool: Chun was frightening beyond belief and demanded that I at least attempt to string together the vague hints of his appearance into an image.