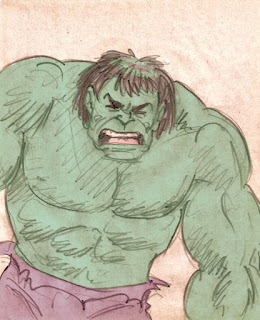 Character Background/Synopsis: When young Rick Jones took his hooligan friends up on a dare and decided to drive out to the testing site of the U. S. Army's gamma bomb, Dr. Robert Bruce Banner took his life in his hands by rushing out to save the boy before it was too late. Managing to throw Rick to safety in a ditch, Banner himself was not so fortunate. Taking the hard gamma radiation of the explosion full in the face, Banner now found that during times of stress the energy transformed him into a giant, hulking behemoth of vast power.

What makes him/her cool: HULK IS THE STRONGEST ONE THERE IS!!! AAAARRRRRGGGGGHHHHH!!!!!
Posted by M. Rasheed at 12:54 PM