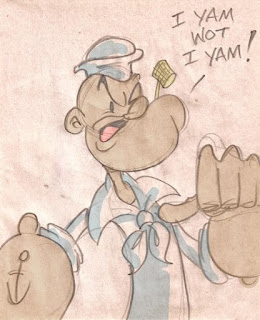 Character Background/Synopsis: The spinach chomping sailor called Popeye made his debut in the old Thimble Theater comic strip and quickly stole the show. Gruff, tough and a 'man's man' he became so well loved by the public he toppled Mickey Mouse as top cartoon character and forced the syndicate to tell Segar he had to make the character more 'heroic' since he was now in the public's eye as a role model.

What makes him/her cool: Popeye took no crap from anybody and he also had super strength.
Posted by M. Rasheed at 12:47 PM