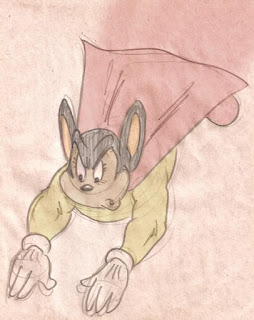 Character Background/Synopsis: Mighty Mouse was the most popular character from Terry Toons, the animation studio formed by former Disney animator Paul Terry. In his formulaic shorts, Mighty Mouse apparently lived in the clouds from which he would appear whenever he heard anyone crying for help.

What makes him/her cool: Mighty Mouse was incredibly powerful, well drawn, and was a bundle of excitement!
Posted by M. Rasheed at 12:52 PM