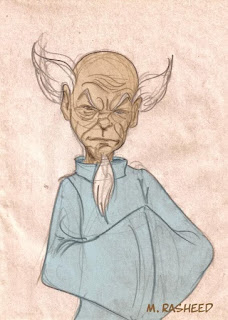 Character Background/Synopsis: His name is Chiun, and he is the Master of Sinanju. Sinanju is not only the tiny, isolated fishing village in the West Korean Bay that Chiun calls home and is the guardian ruler over, but it is also the name of the sun-source of the martial arts invented by the master's distant ancestor and passed on faithfully from father to son. Gaining power and force continuously with each succeeding generation for the last five thousand years, the Art of Sinanju is currently a super combat form, bestowing upon its practitioners vast super powers and abilities.

What makes him/her cool: Because he is the master of the Art of Sinanju, Chiun is literally the deadliest man alive, able to move as silent as a falling hair and known to decapitate a room full of armed warriors almost casually. But what really makes him fun are his impossible to figure out personal quirks and idiosyncrasies which, together with with his maniacal temper and belief that everyone in the world was born to bother the sh*t out of him, makes for some hilarious but frightening moments.

See Also: Tales of Sinanju: The Destroyer, books 1-10 by M. Rasheed (based on characters created by Warren Murphy & Richard Sapir)
Posted by M. Rasheed at 1:04 PM