webkilla: “With his latest comics he's behaving as if him ‘infiltrating’ us is some kind of win on his end. I am seriously confused at what he thought was achieving here, other than trying to somehow get back at us for having banned him previously.”

In his silly “review,” in which he just creates white racist distorted spin-jobs of all of my anti-racism points, he also complained that all I did was accuse them all of being racists (they are) and get under his skin by pretending their insults were clever compliments (so? lol) and generally was an arrogant hot head who was full of "hot takes." Meh. So, with the alter ego disguise, my point was to create a character that was the opposite of their negative M. Rasheed profile, but have it calmly argue the same points. As predicted, they got triggered anyway because I didn’t blindly take the white supremacist point-of-view and banned me again, thus demonstrating for the record that webkilla is a liar and a racist.

The end.
***************
webkilla - Good to see I still live rent free in your head. You can keep trying to re-write history as much as you want - stay salty darling.
Muhammad Rasheed - There's a difference between copy/pasting history versus re-writing it, bud. The former is what I do, while the latter is your "review." ;) 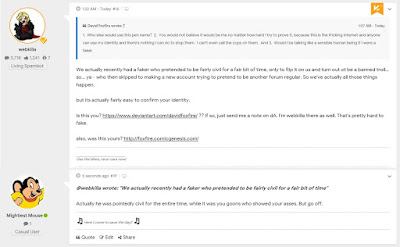