The Depressing State of the Coon 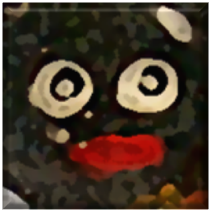 Muhammad Rasheed - What is "cooning?"

"Cooning" is when a self-hating African-American plays the fool for a White audience in exchange for the limited social acceptance the latter are willing to give within their racial hierarchy. Black people who act this way are referred to as "coons" by other disgusted Blacks, who view the behavior as treacherous in nature.

The coon typically lives by an extreme, depressing "if you can't beat 'em, join 'em" personal philosophy, and believes that willingly accepting a life of demeaning race-based social inferiority is the only way to "make it" in a society dominated by the White Supremacist Ideology of the West. The alternative is to fight against a fundamentally unfair anti-Black system, which is very difficult. The likely risk of death, loss of property, and even the risk of losing the minimum quality of life allowed to submissive African-Americans, is too much for the coon to bear, and they prefer their humiliating lifestyle (and its corresponding contemptuous White approval) to the far more noble righteous fight for freedom and the full rights legally due to a native-born citizen of the United States of America.

It's common knowledge that the success of a people is tied to their ability to work together towards a common goal, despite the presence of individual differences. The African-American used this tool to great affect to make it through the most blatant anti-Black eras of American history, and ironically were able to become economically successful within the closed in bubble of forced segregation. The 21st century finds us in a new jim crow period, marked by the "Slavery 2.0" of mass incarceration, and it is interesting that the old tool of a unified Black community is conspicuously weaker than it was at any time in the past. The obscene amounts of wealth generated by the West's race-based exploitation systems guarantee that the break up of the Black community was no accident, nor could it have happened organically. What it creates is an increased sense of hopelessness in the Black individual with the realization that there is no longer any solid Black community that he/she can count on for socio-economic support, so when the individual wants to pursue career dreams, it seems quite reasonable that they will have no choice but to become the coon figure. This painful Western society truism creates quite a few "reluctant coons" -- Blacks who do not want to be in that situation at all, and tend to build up a great deal of anger at both White and Black people. This anger is directed at their own people for not coming together so that they would not have had to make such a despicable choice in life.

Other coon types will cope with the situation by developing elaborate justifications as to why it's actually okay to make such choices, and will avoid the rage fuel of feeling sorry for themselves which comes from courageously confronting the truth of what they have really chosen for their lives. The "reluctant coon" figure will often utter such remarks as "Let me get in here with these White people and do what I gotta do."   Cooning behavior is thus revealed as a cowardice, developed from a defeatist mindset, one that benefits no one but Whites in their role as exploiter. This explains why the police departments, in their role as legal enforcement arm for the White Supremacist power structure, savagely attack African-Americans consistently when they do gather for pro-Black causes to free themselves from their oppressed state.

Cooning can realistically be considered the subjugated state of a conquered people who are resigned to their exploited condition.

Troy Henway - I think the slaves would be offended for you to compare their plight to the black people (mostly men) whom are found guilty of crime and sent to prison. Not only did the criminal have a choice whether or not to commit a crime but todays incarcerated individuals have a life of more freedom and comfort than many slaves did in the 1800s.

The police do not “enforce a white supremacist power structure” they are sworn to serve and protect all citizens. Its this rhetoric that endangers both police and black people.

You must have a hard life as you seem to have hatred against both most white people and it seems a lot of the most successful black people because they dared seek success in ‘hideously racist’ America. Plainly this attitude only hinders not helps.

Unfortunately, I don’t see much use in a comment from someone who is so woefully uninformed on the topic of discussion, and prefers empty political talking points over facts & truth. Although I appreciate you taking the time to respond at all, it seems obvious that the effort — such as it was — was just as much a waste of your time to write as it wasted my time to read. Please improve.