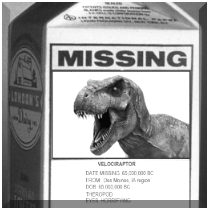 Dino Bernal Goden - From a theologian's standpoint, if God is all-knowing, why don't any of the holy texts (Bible, Torah, Quran) mention the existence of dinosaurs?

Muhammad Rasheed - Because the holy scriptures are not dinosaur text books of any description. The entire point of God's message is to instruct humankind in what to do, and what to avoid, in order to win paradise in the afterlife instead of hell. Since God delegated the minute details of how to perform prayer, fasting, pilgrimage rituals, etc. to His prophets, I can't imagine why He would bother to shove the far less useful trivia about dinosaurs in there. For what?

Why stop there? Why not ask how come God didn't devote a chapter to describing how soft puppy fur is, too?

Muhammad Rasheed - Well, that makes sense because the topic isn't one of "scientific discovery," but of the immaterial spirit and the purpose of religion.

"Hey, how come your cook book doesn't mention the 'manna' of the ancient children of Israel? [hears answer] That rational doesn't invite the sharing of recipes for manna nor baking tips."

Dino Bernal Goden - Your sense of analogy is lost on me.

Muhammad Rasheed - You're insisting on pulling material "scientific discovery" out of a book of immaterial spirits and morality. The analogy showcases a fictional character who also insisted on pulling a 'manna' recipe sharing party out of a modern cookbook. "Manna" is the magic food stuff that God fed the children of Israel on while they were on their way to the Promised Land. Manna would no more have a rational place within a modern cookbook than dinosaurs would need to be mentioned in sacred scripture.

Neither scenario would make a lick of sense.
Posted by M. Rasheed at 4:54 AM