Eurocentrism: "Take Your Pill and Lie Down" 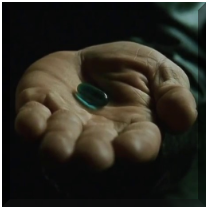 I finally got around to watching "Origins," the first part of Africa's Great Civilizations, the 6-part PBS special by Henry Louis Gates. I was very disappointed. I had enough time in my months of looking forward to it to build it up into this wonderful thing that I assumed it would be, but alas, it let me down.

The problem with it is that the origins of human civilization isn't Skip Gates' forte – especially from the up-to-date, pro-Black findings position – so when he had to address that topic in the show, he was content to just defer to the "experts." This proved horrifying, and was painful to watch. The 'experts' were just a bunch of European talking heads, more than willing to spew the highly problematic, contradictory, nonsensical Eurocentric speculator views of ancient Egypt, the origins of writing, etc. Gates is a Yale man after-all, and isn't likely to buck against the establishment too hard since his mainstream credentialing is very important to him.

Gates fooled me for a second when he briefly discussed the sophisticated rock art depicting Black Africans and various fauna in what used to be the middle of lush greenery in the middle of the most hostile places of the Sahara Desert.

He quickly veered off of that though – allowing the major implications to drop to the ground with a nigh audible "thud" – and let the White talking heads peddle their Matrix blue pills, never mentioning the Nabta Playa site, clear mastery of the Precession of the Equinoxes, the Dogon's skills, and other high-knowledge possessed of the Black ancients. What he should have done was piggy-backed off of Tariq Nasheed's Hidden Colors series for that part of the show. The episode wasn't a complete bust, since they did candidly describe the one-eyed, proudly Black Queen Amanirena, and her victory over Augustus the Roman conqueror, but if Gates had partnered with the Hidden Colors series' findings as he should have, that entire segment would have been filled with unflinching, celebratory pro-Black items exactly like that one.

Now that I've passed the part of 'history' where the Eurocentrists always attempt to force their insane agenda of what they need us to believe happened in order to support the West's precious White Supremacist Ideology, I have some measure of hope that the rest of Africa's Great Civilizations will be much better moving forward.
Posted by M. Rasheed at 1:16 AM