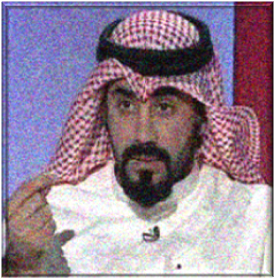 I know we have religious types trying to implement Christian sharia law here as well.

Muhammad Rasheed - Nasser Dashti said: "The religious heritage is the cause of the cultural and ideological catastrophes from which we are suffering."

This opinion of his, that drives the entire force of his activism, is frustrating to me. The religious heritage is the Qur'an and the way of the messenger in demonstrating how to walk out the Qur'an. The habits and traditions of the older, toxic Arab culture are what Islam came to correct. The negative aspects of the Muslim World, that outsider peoples are right to frown upon, are no less than the toxic culture encroaching BACK into the territory that Muhammad (peace be upon him) purified with the new faith. The Arabs themselves don't separate their entwined culture from the religion, thus producing erroneous comments like what I just quoted from Dashti. As a non-Arab Muslim myself, I am particularly sensitive to make sure I shine a penetrating-revealing spotlight on squirming, slithering chunks of Arabism pretending to be Al-Islam. The Arabs --especially the so-called "Cultural Muslim" -- have rarely been keen to do so, since Islam is also a source of national pride for them as their greatest ethnic contribution to the world. So if they refuse to do so, I can reasonably expect the non-Muslim to not know the difference between "religious heritage" versus "Arab culture & ideology" and so I take the time to point out "That isn't Islam, THIS is Islam" whenever the opportunity presents itself, because it's important to me as a believer.

My bottom line is that I take serious issue with the idea that "religious heritage" is actually the problem in the Muslim world; instead it is actually the creeping diabolical return of the old cultural ideologies God used Islam to beat back. I do understand the "anti-Islam" outsider arguments, but I reject them primarily because they are fallacies that don't reflect the faith itself.

Stephen Wilkinson - but what do you think about the comment one of the guys made - basically a call for a "separation of church and state" and a publicly secular with private religious practice ( which America used to have :P )

Muhammad Rasheed - Within the Muslim world, I would be more interested in theological policies that actually reflected the verse and spirit of Al-Islam as presented in the Qur'an and the prophet's example, as opposed to Arabism that is merely pretending to do so in the form of modern practical "sharia." Contrary to popular belief, this would create the fertile environment ripe for the progressive ideas we Westerners are supposed to be reaching for here in the American Experiment. It's no coincidence that the Qur'an was present on the 'table' when the ideals for a free United States of America were first being developed.

Wait... You Converted to Christianity Because of What the Qur'an Said About Jesus???

RESPONSE - "A Message to President Obama from a Former Muslim"

Who is Worst? Battle of the Terrorists
Posted by M. Rasheed at 12:27 PM